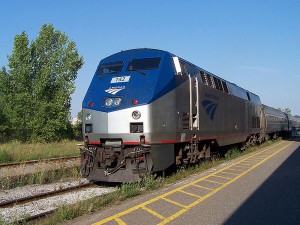 The RCMP held a news conference Monday afternoon to announce the arrest of two men who allegedly worked with Al Qaeda “elements” in Iran.

Canadian officials say Al Qaeda gave “support and direction” to the terror plot that was broken up this morning in Montreal and Toronto.

Two men were detained for allegedly plotting to derail a VIA passenger train.

James Malaysia with the Royal Canadian Mounted Police says investigators have been monitoring the alleged plot over the last twelve months.

“Chiheb Esseghaier and Raed Jaser were conspiring to carry out an Al Qaeda supported attack against a VIA passenger train,” he said.

According to sources speaking with Reuters, the route being targeted may have been the popular Toronto-New York City link.

Authorities say the two men aren’t Canadian, but declined to say where they’re from.  According to Malaysia, the plot had “guidance and direction” from terrorists in Iran.

They also declined to say what evidence had been turned up during searches today in Montreal and Toronto.   Details from NPR:

The two accused, Chiheb Esseghaier, 30, and Raed Jaser, 35, are charged with “conspiring to carry out an attack against, and conspiring to murder persons unknown for the benefit of, at the direction of, or in association with a terrorist group.”

Announcing the arrests, officials said that the pair had the ability to carry out their plan, but “there was no imminent threat to the general public, rail employees, train passengers or infrastructure.”

The authorities say the suspects are not connected to last Monday’s bombing attack on the Boston Marathon.

The two men lived apart — Esseghaier in Montreal and Jaser in Toronto. They were reportedly under surveillance for more than a year before their arrest. A court date has been set for Tuesday.

“The individuals were receiving support from Al Qaeda elements located in Iran,” Malaysia asserted.  “There is no information to indicate that these attacks were state sponsored.”

Officials in Canada say the attack was still in the planning stages.   Terrorism concerns in Canada were heightened earlier this year when it was learned that two Canadians took part in an attack on a gas plant in Algeria.

NCPR will have more on this story tomorrow during Morning Edition and the 8 O’clock Hour.