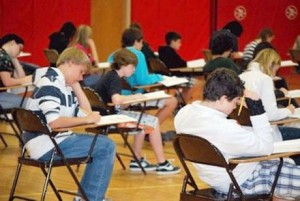 Last week we reported that parents in some of the North Country’s local schools are pushing back against the increasing reliance on standardized testing in New York State. In fact, they’re boycotting the third and eighth grade testing still underway this week. Last week, the kids took the English portion of the tests; this week it’s math.

Chris Knight followed up that story in The Adirondack Daily Enterprise with the news that the Saranac Lake boycott of the English test drew 54 students – double what organizers had expected.

Reportedly, thousands joined the boycott statewide. Now it seems the state’s largest teachers union is piggy-backing on the parent concerns, and throwing its weight in with an ad campaign and a petition. New York State United Teachers (NYSUT) has its own oar in the water on this,  as test scores are now to be used in teacher evaluations. (Here’s a press release from NYSUT stating the organization’s position on state testing.)

The Albany Times Union reports this sympathy with the parent boycott comes despite the union’s public agreement on using the test scores in teacher evaluations, which dates back to Feb., 2012, when Gov. Andrew Cuomo brokered agreement between teachers unions and the state Education Department:

New York State United Teachers President Richard Iannuzzi stood on stage with state Education Commissioner John King to announce the hard-won plan. Leaders of the state’s two powerful unions had finally agreed that the tests were a valid method of assessing teacher success when paired with other measures…

Iannuzzi hasn’t recanted, the TU reports, and NYSUT has a lot of issues on its to-do list besides testing. But at the same time, the union’s website includes an account of its president’s visit to Rome, in Oneida County, under the headline: Iannuzzi: Over-testing a communitywide concern:

Iannuzzi said that the state’s obsession with standardized testing  — which Rome Teachers Association President Rob Wood called “a set-up for failure — has brought together teachers and parents like never before. NYSUT has led a very public campaign against the over-emphasis on tests, even though the new curriculum has not yet been taught in many cases.

There’s a handy “Too Much Testing?” petition for parents and educators to sign at the union website. And an account of a meeting of union members in a six-county area in Central new York focuses on the impact on students:

The auditorium was silent listening to the account of a gifted student – an incredible thinker – who burst into tears at the words, “Pencils down,” because she hadn’t had time to finish the last essay. Minutes later, she was still “walking down the hallway with tears streaming down her face. And she’s 8.

The Central New York meeting comes during the run-up to a major NYSUT “rally for education”, on June 8, in Albany.