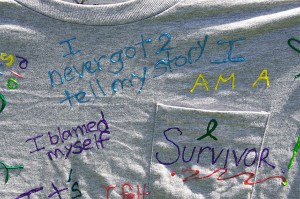 This morning, we talk in depth with Mitch Teich, the public radio reporter who broke the story of sexual abuse allegations within US Speedskating.  One of that sport’s top figures — four time Olympian Andy Gabel — has stepped down.

His alleged assaults against two 15-year-old girls in the 1990s included incidents in Lake Placid and Saratoga Springs. “I was scared, I was petrified,” said speedskater Bridie Farrell.  “I was a little kid.  Why would someone believe me?”

It’s a shattering story, particularly here in the North Country where sports run deep in our culture and where coaches and mentors are revered.

But it’s also true that this situation isn’t new or novel.  We’ve had sexual abuse scandals before, both in athletics and in other situations — teachers, clergy, scouting and so on — where adults take on outsized mentoring roles.

April is Sexual Assault Awareness Month.  Find out more from the CDC by clicking here.

Most coaches, most teaches, most priests, most scoutmasters are good and ethical people.  But, on the other hand, it is surely time to stop pretending that child-sex predators are rare or a marginal problem.

Surely it’s time for parents to educate themselves about the patterns of sexual predators, the strategies they use to “groom” both kids and parents.

If someone is offering to help with your child, you need to ask tough and sometimes embarrassing questions about their motives, and about the checks and balances that will be in place.

Especially at times when your family is in crisis and you’re leaning on other people for help — a divorce, financial struggles, and so on — you need to be cautious.  Predators are brilliant at finding kids and parents who are vulnerable.

Surely it’s also time for organizations that work closely with children to place safety and institutional safe-guards at the very top of their “to-do” list.  Well above winning games, above avoiding embarrassment, above dodging lawsuits.

If organizations have questions or doubts about the behavior of a staff member or volunteer, they need to call the police and allow the experts to investigate concerns properly.

The age of handling these concerns in-house, or quietly dismissing someone, should be over.

We need to look closely at the statute of limitations for both criminal and civil cases involving sexual abuse.

We know that many children conceal their victimization, and their suffering, sometimes for decades.  Silence — and the inability to bring prosecutions — are two of the big advantages that predators enjoy.

We should also examine the possibility of making organizations liable for failing to report suspicions of criminal sexual activity to police, with stiff penalties for those who fail to come forward.

Finally, girls and young women should be given specific, unambiguous and clear-eyed education about the dangers of sexual predators, and they should be informed about safe places to go for help if they feel at risk.

An exhaustive survey conducted in 2011 by the US government found that 1-in-3 women are “victims of a rape, beating or stalking, or a combination of assaults” according to the New York Times.

It’s a shameful statistic.  Surely the place to start in rolling back this epidemic of sexual violence is by protecting the youngest, most vulnerable girls and women.