Subscribe
iTunesSpotifyGoogle PlayRSS
by Martha Foley on May 21st, 2013 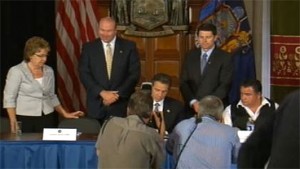 At a press event webcast live from the capitol, the governor and chiefs signed off on settling a long-running dispute over revenues from the Mohawks’ Akwesasne Casino. The tribe had withheld tens of millions of dollars in revenue from the state, claiming the state had allowed infringement on its exclusive rights to casino gambling.

According to a press release from the governor’s office:

Under the agreement, the State will remove the eight-county Saint Regis Mohawk exclusivity zone from the proposed casino-siting legislation, and the Tribe will pay $30 million of payments owed and 25% of future gaming revenues to the State. The agreement also initiates discussions between the State, the Tribe, and local governments to resolve unrelated land claim disputes.

Officials from St. Lawrence and Franklin counties were on hand for the signing, as was state Sen. Betty Little.

It’s the second such agreement in the last week. The governor inked an agreement with the Oneida Nation, giving the Oneidas a 10-county zone of exclusivity around their Turningstone Casino in Central New York.

The Oneida agreement ended that tribe’s long land claim. But the Mohawk land stands, for now:

The Governor will convene discussions among the State, the Tribe, and St. Lawrence and Franklin Counties to resolve unrelated disputes involving land claims and New York Power Authority issues. The remaining revenue share will be held in escrow pending resolution of these outstanding issues.