Subscribe
iTunesSpotifyGoogle PlayRSS
by Brian Mann on May 21st, 2013 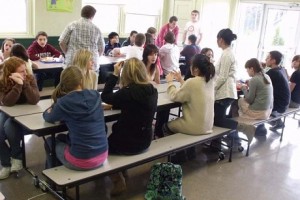 Voters in the North Country sent a clear message to school districts that tried to exceed the state property tax cap.  The answer was a resounding No.

The vast majority of the region’s budgets came in under the cap and passed handily.

But four of the region’s school systems — in General Brown, Minerva, Newcomb and Tupper Lake — asked voters to go beyond the roughly 4-5% hike allowed by state rules.

In order to do so, those schools needed a 60% super-majority.

But in two out of the three districts, Minerva and Tupper Lake, a clear majority of voters rejected the idea, according to reports in the Adirondack Daily Enterprise and the Glens Falls Post Star.

In Newcomb, meanwhile, a majority of voters approved the higher budget, but not by the margin required.

At General Brown Central, where the district sought a 9.9 percent tax levy increase, WWNY-TV reports that a majority voted for the budget, but it fell short of the 60-percent needed to exceed the state tax cap.

All four districts will now have to rework their budgets, cutting more dollars from programs, salaries and other costs.  They are expected to put their revamped spending plans to a vote next month.

Tuesday’s vote appeared to signal an unwillingness on the part of voters to accept substantial spending increases, even when district leaders made a strong argument that more dollars were desperately needed.

Tupper Lake school superintendent Seth McGowan argued earlier this spring that the district faced a risk of insolvency.  “We have plugged all the holes in the dam, battened down the hatches, and we have been under tremendous pressure. Now the levy just broke.”

That view was echoed by Tupper Lake district board chair Dan Mansfield.

“Now we’re at the point where we’re talking about surviving, actually surviving with a viable school that can graduate students and meets the minimum requirements by law,” Mansfield said in March.

But in Tuesday’s vote, according to the Enterprise, Mansfield was voted out of office.