Subscribe
iTunesSpotifyGoogle PlayRSS
by Julie Grant on May 22nd, 2013 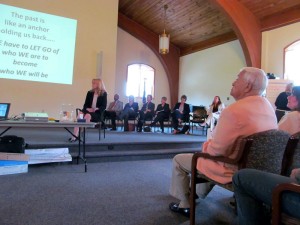 There’s a lot of speculation out there about the future of the St. Lawrence Psychiatric Center in Ogdensburg. The NY Office of Mental Health is considering closing a number of state hospitals, saying that at 24, New York has more than 3 times that of any other state.

Acting Mental Health Commissioner Kristin Woodlock visited Ogdensburg last week, as part of her “listening tour” of hospitals, and she got an earful from the community – including concerns about the possible loss of care for patients, and of more than 500 jobs.

Woodlock said a decision could come as early as Monday. But Monday came and went without word from the state, and people want to know what’s going happen.

The Watertown Daily Times speculates that “no news could be good news” for the Ogdensburg facility. Robert McNeil, chairman of the St. Lawrence River Valley Redevelopment Agency said, “I’m optimistic.” He said the Commissioner’s visit was a success, “There was a lot of good testimony there.”

I spoke with Ben Rosen, spokesman for the NY Mental Health Office, this afternoon.  He wouldn’t give any information about what or when we might hear from the state, despite the community’s anxiety.  It sounds like no news isn’t necessarily good or bad.  It’s just no news. We’ll keep you posted as soon as we hear anything…

2 Comments on “Ogdensburg wants news about the psych center; the state’s not talking”