Subscribe
iTunesSpotifyGoogle PlayRSS
by Brian Mann on May 25th, 2013 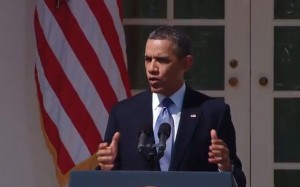 One of the weird muddles complicating the scandals swirling around the Obama administration is that the accusations –broadly speaking — stem from two fundamentally different convictions about the White House and its stance on national security and the war on terror.

On the one side is a conservative narrative about Benghazi that goes something like this:

When US forces were under attack in Libya, Obama was tuned out, overly passive, and ineffective.

His team failed to use all the resources available to try to prevent the death of American personnel on the ground.  The result?  Four people dead.

In the days afterward, so goes the storyline, Obama’s team downplayed or tried to conceal the fact that an act of full-blown terrorism had occurred, giving incomplete and inconsistent answers to the public and Congress.

This picture takes on its gravest connotations when you fold it into the wider right-wing narrative about Obama, that he is a Muslim sympathizer – perhaps even a closet Muslim – who has weakened America, perhaps deliberately.

On the other side is a liberal narrative about drone attacks, Guantanamo Bay, the killing of American citizens, and the AP-Justice Department probe that goes something like this:

Team Obama has internalized too many Bush-era ideas about the war on terror.

He has acted far too aggressively and unilaterally, using military force with abandon, failing to shut down Gitmo, and compromising first amendment rights by investigating journalists who publish national security secrets.

According to this storyline, Obama moved to wrap the imperial-presidency-smoking-gun foreign policy agenda of the Bush-Cheney era in a kinder, gentler Democratic Party veneer.

The results?  A lot of hellfire missiles raining down on peasant villages in Pakistan and guys in orange jumpsuits on hunger strike at Gitmo.

One can see why this might be fraught political territory for a Democratic president. There is little hope of winning over conservatives by being tough.  There is a great danger of alienating liberals by appearing too militaristic.

But so far at least, the public seems to feel relatively comfortable with the idea that in a messy, dangerous world, Obama’s team is getting it more right than wrong. His poll numbers are holding steady.

And despite high profile attacks like the one in Boston, the number of people dying in the global terror conflict — including attacks here in the US, as well as fatalities in Afghanistan and Iraq — continues to decline.

So here’s my question to you.  As you think about the big picture, Americas national security in Barack Obama’s second term, and the current rash of scandals, what do you see as the fundamentals?

Is the president getting the porridge too hot, too cold, or just right when it comes to foreign policy and keeping America safe?  Comments welcome below. Also, check out President Obama’s national security address from this week.

8 Comments on “Obama on national security: too weak, too strong”