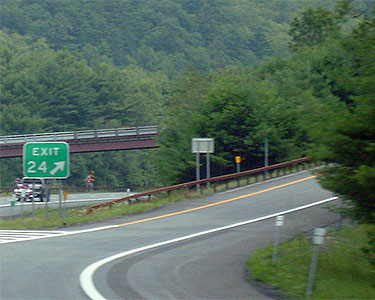 No exit? Did the routing of the I-87 corridor cripple Champlain Valley towns? Photo:Mitchazenia, Creative Commons, some rights reserved

The other day I drove from our camp in Westport down to Ticonderoga to pick up gardening supplies, some groceries, and some parts for a chainsaw.

What I saw along the way was dismaying.  More closed businesses.  More buildings in once-proud downtowns boarded-up, their front yards gone to weed, their brick facades covered with plywood.

Here’s the weird thing.  Port Henry, Crown Point and Ticonderoga are some of the most beautiful villages in the North Country, far more accessible than many hamlets in the region, with relatively easy access to Albany and Vermont.

They lie in what appears to be a sweet spot for discovery, nestled between the shores of Lake Champlain and Lake George and the foothills of the Adirondacks — with sweeping views of the Green Mountains.

So what gives?  Why the malaise? 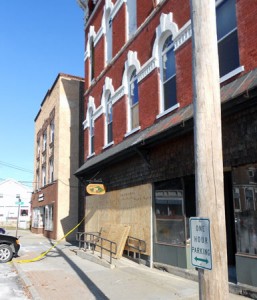 I wonder if one lingering body blow to this long stretch of towns — from Ticonderoga in the south to Willsboro in the North — was the decision in the 1950s and 1960s to route the Northway through the middle of nowhere.

Check the map and you’ll see that for the most part, the I-87 artery avoids populated areas between Lake George and Plattsburgh.

To reach most of the places where local North Country residents live, you have to take significant spur roads.

In other words, the interstate seems to deliberately take people through the Champlain Valley, rather than bringing people to the region.

Yes, it’s a great — and scenic — way to reach Montreal.  But if you want to get to, say, Port Henry or Moriah, it’s pretty darned inconvenient.

There was a time, of course, when people traveling north were forced to follow Route 9n or 22.

Much slower, but it took you right through these little towns, with their local attractions, their beaches, their bustling downtowns.

Now the vast majority of traffic hums past.  Because the Adirondack Park’s rules sharply limit road signs, there aren’t even many indications along I-87 that there’s cool stuff to see or do with a slight detour.

Obviously, there have been other big factors side-swiping these economies.  Rural America has struggled for decades.  A lot of traditional industries — mines, factories, logging operations — have gone bust.

But it’s hard not to imagine that a gorgeous “coastal” village like Ticonderoga or Port Henry would look very different right now if it were a short, direct, no-hassle interstate hop from Albany.

I-87 might even have served the North Country of New York in the way that the Pacific Coast Highway served rural California, introducing travelers to amazing scenery and amazing destinations.

The bottom line is that a lot of these communities have incredible assets.  Great beaches, amazing bed and breakfast joints, world-class attractions like Fort Ticonderoga.

But at present, too many people are encouraged — physically, by the structure of our biggest travel corridor — to bypass all of that, unaware that most of it even exists.

Some of this might be fixable — or at least mitigated — through clever marketing.  Perhaps we could package “New York’s Lake Coast Highway” as a sort of blue highway experience that runs from Lake George all the way to Quebec.

So what do you think?  Did I-87 bypass your town and how do you think that affected the community, the business district, the quality of life?  Or are you glad the Northway doesn’t buzz too close to your little village?

Comments and ideas welcome, as always.

32 Comments on “Did the Northway kill the Champlain Valley?”