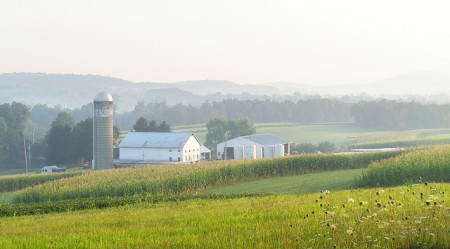 The failure of the Farm Bill in the U.S. House last month came as a surprise to many. As David Sommerstein wrote in NCPR’s blog The Dirt at that time, “Republicans voted against the bill, many because they didn’t like its nearly $100 billion a year price tag and thought cuts should be deeper. Many Democrats voted against it because it cuts $2 billion a year from the food stamp program.”

About a week before, David (who has been covering agriculture for NCPR for more than a decade) had written about the possibility that the Farm Bill and the Food Stamp program (officially called SNAP, the Supplemental Nutrition Assistance Program) might be severed from the Farm Bill. SNAP and the Farm Bill have been joined together for decades, David wrote, because “conservatives representing rural districts wanted subsidies for agriculture; liberals representing urban districts wanted money for food stamps for cities’ impoverished residents. They each held their nose about the others’ interests and voted for the farm bill.” Food stamp spending makes up about 80 percent of the Farm Bill.
It’s what Democratic North Country Congressman Bill Owens has called a “carefully constructed and delicate balance.” For many conservatives, SNAP spending is excessive and the program, which they see as riddled with fraud and abuse, shouldn’t be tied to farm funding. For some advocates for the poor, the Farm Bill benefits big companies, while cuts to food stamps disproportionately hurt those who can afford it least.

Now, according to a press release from Owens’ office, House Republican leaders are thinking it’s time to break up the delicate balance. Here’s the full text of the release:

WASHINGTON (AP) — A month after suffering an embarrassing defeat, House Republican leaders are considering a new strategy to try to win support for the massive, five-year farm bill: splitting it into two separate measures, one for farm programs and one for food stamps.

It’s an attempt to gather support from conservatives who voted against the $100 billion-a-year farm bill, and critics say it could lead to bigger cuts in both farm subsidies and the domestic food aid.

Republicans discussed the strategy in a Tuesday caucus meeting, with House Agriculture Committee Chairman Frank Lucas, R-Okla., saying for the first time that he would go along with a split bill if leaders could deliver the votes. Republicans were assessing support for the idea, and a spokesman for House Speaker John Boehner, R-Ohio, said no decisions had been made on how to revive the bill.

The House rejected the farm bill in June by a vote of 234-195 after some in the GOP complained that the legislation did not cut enough from food stamps. Democrats said the 3 percent cut in food stamps was too much.

The idea is that the farm portion of the bill could pass without the food stamp provisions. By splitting the two, Republicans might be able to make bigger cuts in food stamp programs and pass that bill with conservative support.

However, conservative groups, farm groups and nutrition groups all expressed concerns with the strategy.

Farm groups and anti-hunger groups have warned that separating the farm and nutrition programs after decades of linking them would be a major mistake. Rural lawmakers have added money for food stamps to the farm bill, which sets policy for agricultural subsidies and other farm programs, to gather urban votes for the measure.

The Democratic-led Senate, which overwhelmingly passed a farm bill with smaller cuts to food stamps, would be reluctant to go along with a split bill or further cuts to the programs.

Senate Agriculture Committee Chairwoman Debbie Stabenow, D-Mich., said that she believes splitting the bill would be a “major mistake.”

Spending on food stamps has doubled in the last five years to almost $80 billion a year and the number of members in both parties who make agriculture a priority has dwindled. Still, separating the two bills could create bigger problems as members may not have an incentive to vote for either piece of legislation.

In a letter to Boehner last week, more than 500 farm groups discouraged GOP leadership from splitting the legislation.

“We believe that splitting the nutrition title from the rest of the bill could result in neither farm nor nutrition programs passing, and urge you to move a unified farm bill forward,” the groups wrote.

Compounding the difficulties would be any changes to the farm legislation to gather more conservative votes. The farm bill passed by the House Agriculture Committee and rejected by the full House would have cut farm subsidies by about $2 billion a year, but some Republicans have wanted deeper cuts.

As the GOP counted votes for the split bill strategy, conservative groups proposed further cuts to farm subsidies. They expressed concern that House leaders were just trying to push the bill through so they could begin negotiations with the Senate.

“The end result of such a conference would be a perpetuation of subsidies and government intervention that will continue to harm consumers and taxpayers alike,” said Michael A. Needham, CEO of the conservative advocacy group Heritage Action.

At the same time, Agriculture Committee members from both parties who helped craft the delicate balance of the bill don’t want to see further reductions.

Minnesota Rep. Collin Peterson, the top Democrat on the Agriculture Committee, said that splitting the bill is “stupid” and he doesn’t believe any Democrats would vote for it.

“Even if they got this through the House, I don’t see how you are successful in getting a bill out of conference and signed by the president, because you have alienated so many people in the process,” he said.

More difficult than passing a farm-only bill would be passing a food stamp bill, as Republicans have disagreed on how much should be cut. The House Agriculture Committee bill cuts about $2 billion a year from the almost $80 billion-a-year program, now called the Supplemental Nutrition Assistance Program, or SNAP. But some on the right would like to see much bigger cuts and to change the structure of the program.

Billy Shore, the founder and CEO of the anti-hunger group Share Our Strength, says the split would make SNAP vulnerable when many families and children are dependent on it. Around one in seven people used food stamps last year.

“The concern is that (splitting the bill) would make it easier for the Republican leadership to find support for those cuts,” Shore said. “For a program that has worked so well for decades it feels a little short-sighted.”

Jon Doggett, a lobbyist for the National Corn Growers Association, said that farm groups will continue to need allies as rural areas decrease in population and fewer members of Congress are elected on farm issues. In addition to nutrition advocates, the bill also brings together agriculture and environmental groups who favor conservation measures in the bill that protect environmentally-sensitive farmland.