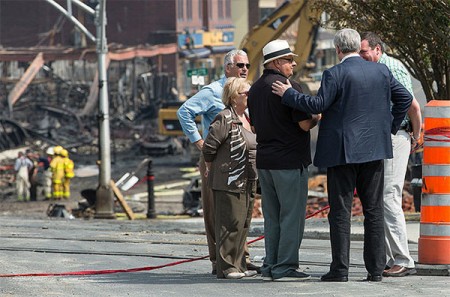 “The source has been plugged, practically nothing is getting into the river.”

Physical clean-up will be more complex, requiring decontamination (or removal?) of soil contaminated by the spill and the fire.

And the emotional recovery? Well, that’s barely begun. Consider this: the death toll as of this writing still stands at 15 but the number of persons considered missing has risen to 60. This remains a landscape of prolonged pain for the people of Lac-Mégantic.

The story has several main elements: the tragedy and its impact on Lac-Mégantic, the cause of the event, the implications it raises for moving oil by rail and the safety issues faced by any community where dangerous rail cargo regularly rocks past homes and businesses. In New York’s North Country towns, the sound and sight of a cargo train passing by an everyday thing, and this tragedy raises questions about how we should be thinking about those trains.

Turning to the cause of the “event” – what had initially looked like an accident is now the subject of a criminal investigation. As reported by CBC:

Police said they are investigating whether Saturday’s derailment and subsequent explosion — which leveled the centre of the lakeside Quebec town killing at least 15 and probably dozens more — involved foul play or criminal negligence.

“We are conducting a criminal investigation. We are not neglecting anything so far,” provincial police inspector Michel Forget told reporters on Tuesday evening.

Press reports say this could be North America’s worst rail disaster since 1989. (Those interested in deeper details or current developments would do well to check Canadian news accounts on line.)

NCPR’s Brian Mann has long experience reporting on oil spills and environmental issues. He’s heading to Lac-Mégantic today to cover the situation for NCPR and NPR.

Brian will check in with Martha Foley on tomorrow’s 8 O’clock Hour and may have photos or videos to share on line. Stay tuned.

3 Comments on “Lac-Mégantic: tragic and complicated”