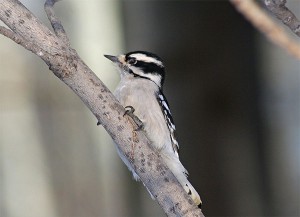 The news for ash trees has been decidedly gloomy thanks to the steady march of the emerald ash borer.

But new research suggests what might be a silver lining or a glimmer of hope: emerald ash borers provide a healthy boost in food supply for birds like woodpeckers. (Going beyond tasty bugs, dead ash trees also offer more habitat for cavity-nesting birds.)

That was a major finding of a study published earlier this month in the journal Biological Invasions (“Effects of the emerald ash borer invasion on four species of birds”). U.S. Forest Service entomologist Andrew Liebhold worked with Cornell University scientist Walter Koenig and others in research that focused on the Detroit area. Here’s more from an informative USDA Northern Research Station press release:

“The emerald ash borer has been massively destructive because most North American ash trees have little or no defense against it,” Liebhold said. “We can take heart that native woodpecker species are clearly figuring out that EAB is edible, and this new and widely abundant food source appears to be enhancing their reproduction.”

And, apparently, this study relied upon team work from U.S. and Canadian nature-lovers:

Data used in the study were collected by volunteers for Project FeederWatch, a Cornell Lab of Ornithology and Bird Studies Canada project in which volunteers count birds that visit feeders at backyards, nature centers, community areas, and other locations from November through early April. The data helps scientists track movements of winter bird populations and long-term trends in bird distribution and abundance.

Will all areas experiencing ash die-off see similar – if temporary – spikes in woodpecker populations? As reported by the Ottawa Citizen’s Tom Spears, that may seem likely, but it’s still too soon to be sure.

Speaking of the Cornell University Lab of Ornithology, if you have 8 minutes to spare for a beautiful pick-me-up, check out this slideshow highlight reel of the justly-beloved heron cam for the 2013 summer nesting season.