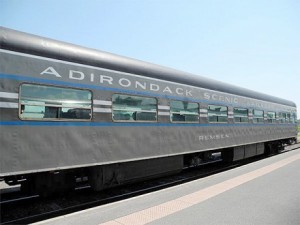 Time for the debate to leave the station? Photo: Matt Johnson, Creative Commons,  some rights reserved

This just in from New York’s Conservation Department:

Sessions will be held in Old Forge, Tupper Lake, Ray Brook and Utica.  This is a public debate that critics of the tourism train now operating in the north-central Adirondacks have been demanding.

The issue has divided long-time allies, and meant peculiar partnerships between old foes.  But this is the first time that state officials have waded into the fray.

Here’s the balance of the DEC’s press release:

Information and comments gathered from the public and stakeholder groups will help the commissioners of the two state agencies determine whether to amend the Remsen-Lake Placid Corridor Unit Management Plan.  The plan, adopted by DEC and NYSDOT in March 1996, assesses the natural and physical resources along the 100-foot-wide corridor and identifies opportunities for public use.  It guides how the corridor is used and managed.

The public meetings are scheduled for the following dates and locations.

The sessions will include a presentation by the state agencies and informational stations where the public can give state agency staff their comments and ideas verbally or in writing.

All of the meeting facilities are wheelchair accessible. Requests for directions or specific accommodations for any of the meetings may be directed to 518-897-1200 or 315-793-2327.

NYSDOT manages the line in keeping with a Travel Corridor Unit Management Plan developed in conjunction with DEC.  Approximately 100 miles of the corridor is located within the Adirondack Park.  An additional 19 miles is located outside of the Park in the Tug Hill Region.

45 Comments on “NY takes up Adirondack train debate In September”