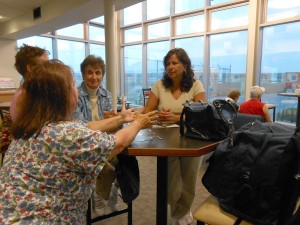 Passengers wait for a 7 am flight to Chicago at the Watertown International Airport. The airport will receive nearly $2 million for runway upgrades. Photo: Joanna Richards

Senators Schumer and Gillibrand have just announced the awarding of nearly $10 million in funds to upgrade North Country airports. The funds will be divided between Massena, Malone, Ogdensbug and Watertown, with Massena receiving the largest award, more than $4 million.

The full text of the announcement follows:

“This massive federal investment will be a major boost for safety and quality of infrastructure at the Massena, Malone, Ogdensburg and Watertown airports,” said Senator Schumer. “I am pleased that the FAA has made this important investment for runway upgrades and safety equipment at these North Country airports.”

“This is an important investment for these North Country airports,” Senator Gillibrand said. “Improving these airports’ infrastructure can help provide better, safer service for travelers and businesses, keep more flights on time, and help strengthen the North Country’s economy.”