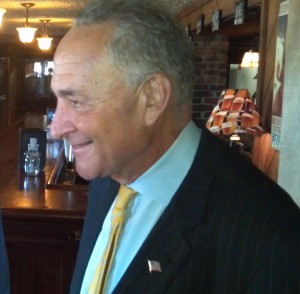 Does it matter if Parmesan cheese is made in the Adirondacks? What if Adirondack beer is made in Parma? (Photo: Brian Mann)

Senator Charles Schumer walked a complicated line on Friday when he toured the North Country singing the praises of artisan foods.

In the morning, he visited Lake Placid, arguing that tax cuts could spur a renaissance in craft beer production.

The growth of companies like the Lake Placid Pub and Brewery would mean “more Lake Placid labels reaching people throughout the country…and so it has an added benefit of advertising this area because of the serendipity of the name.”

But later in the day, Schumer argued that truly local brand names shouldn’t be protected by international trade law.

During a visit to the Macadam cheese plant in Chateaugay, Schumer urged the US to oppose efforts by European countries to essentially trademark geographically specific names such as “munster” (a town in France) and “parmesan” (which developed in the Parma region of Italy).

“Cheese production is a growing industry in Franklin County and Upstate New York, but right now it faces a major threat from free trade agreements that could place geographic restrictions on cheese labeling,” said Schumer.

“That’s why I’m urging Ambassador Froman to hold nothing back when negotiating on behalf of U.S. cheese producers—because Muenster is Muenster, no matter how you slice it.”

But that’s a double-edged cheese knife that Sen. Schumer is wielding.

While New York cheese-makers hope to borrow the cachet and easy recognition of long-established European cheeses, wines and other products, we’re watching our local brands be outsourced at a troubling pace.

Old Adirondack, a furniture maker in Willsboro, closed its doors a few years ago, in part because of withering competition from overseas makers who sell traditional “Adirondack chairs” at a fraction the price.

The wood isn’t local and neither is the label.  But they still carry the design and the name of our region.

And it turns out that the vast majority of beer that carries a North Country label — Lake Placid, 46er, Adirondack, etc. — is also produced outside our region, mostly in Utica.

As the Senator notes, that creates a valuable advertising opportunity, but most of the production jobs are located elsewhere.

The way companies are bought and sold these days, there’s no reason why “our” locally branded beers couldn’t eventually be produced by a company headquartered in Spain or Taiwan.

Other American regions and states have taken a different approach to regional branding.

Vermont, for example, carefully protects its brand, even taking legal action against producers who make a claim to the Vermont identity and to Vermont standards, without walking the walk.

And there’s some reason to think that this kind of brand-caution has merit.

As more and more consumers yearn for authentic, locally produced products — the locavore-farmer’s market-artisanal industry is booming — people may be increasingly turned off when the realize that it’s difficult to find a true Adirondack chair.

Will it matter if at some point down the road an “Adirondack” labelled beer is produced in New Jersey or Pennsylvania?  It’s a question we might want to put to the people of Munster or Parma.