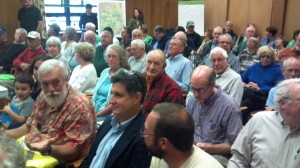 This week, I’ve gone spelunking in the wild, ferocious world of the Adirondack rail-trail debate.  Trust me, it’s a rabbit hole of zeal and rhetoric that Lewis Carroll couldn’t have dreamed up.

Because I live in the Adirondacks and have good friends on both sides of the debate, my Facebook page and my email box are full of people chiming in and sounding off.

The trouble here isn’t that people have strong opinions.  That’s great.  In fact, I think the debate has inspired both sides to come up better, more exciting ideas.

The problem is that both sides — those who want a new recreational trail and those who want a refurbished tourism train — have gotten downright mean, each accusing the other at various times of dishonesty, bullying and mean spiritedness.

And remember that both sides have legitimate arguments to make, the one camp pushing for a vision of a rail line that ferries visitors into the heart of the Adirondack wilderness, the other camp pushing for a less costly multi-use trail that would also open new kinds of access.

Yes, both sides have stretched their arguments on occasion, picking and choosing numbers to fit the story they’re trying to tell.  But no more than people always do when trying to win a debate.

I’ve seen plenty of spin here, but no outright deception and nothing I would describe as underhanded — from either faction.  Both groups, in fact, clearly believe that their narrative is true.

Which brings us to this week.

State officials decided not to buy into the us-versus-them-take-no-prisoners narrative that’s been brewing.

Instead of holding a series of rail corridor meetings where people spouted off and hissed at each other, repeating the same old arguments, the DEC and DOT held a much more holistic series of planning meetings.

Participants broke up into small groups.  The public had an opportunity to  talk one-on-one with state experts from the Conservation and Transportation departments, offering their opinions, sharing their views of the facts.

I heard a few people complaining about the format, some passionately.  They demanded an old school forum.  They demanded that their questions and suspicions be addressed immediately.

And I get it.  Normally, I’m not a huge fan of bureaucrats trying to stage manage events like this, but as far as I could see the exercise actually worked.

People had a chance to be heard and to shape an important public discussion, without raising the temperature even higher.

So this is one case where maybe the public can take a page from the government bureaucrats.  Take a deep breath.  Remember that the people on the “other side” are actually your neighbors and friends.

Remember that we’re talking about a tourism rail corridor, not the future of Mideast peace.

And do your best to listen and to think hard about your own positions and your own tone.  Remember that, whatever your position, you’re asking the other camp to make some big, painful concessions.

Train supporters are asking the public to pony up a lot of money to pay for their vision of a tourism railroad that runs through the heart of the wilderness.  And to trust them with another decade or so of management of this valuable corridor.  That’s big.

Trail supporters, meanwhile, are asking people who care deeply about this train line — its history, its potential — to give up a dream that they’ve struggled mightily to bring to life.  That’s huge.

I could be wrong, but I suspect that the “winning” side here will be the one that shows the most humor, compassion, and flexibility as this process moves forward.

I know this sounds like a full-blown finger wag.  And yeah, guilty as charged.  But of all the big public debates I’ve covered in the Adirondacks, this may be the one that has the least credible rationale for ugliness and vitriol.

61 Comments on “Railroad feud: when bureaucrats school the public”