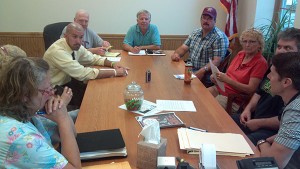 Community leaders met this week in Chateaugay to begin their fight to save the state correctional facility. Photo: Brian Mann

Town leaders and activists, including current and former prison employees, are rallying to try to convinced state officials to change their minds.

They met yesterday afternoon to plan, distribute yard signs, and develop a letter-writing campaign.  They plan to hold a big rally next month.

Brian Mann interviewed Brenda Brue, a nurse at the correctional facility.  Brue says the closure will change her life and cripple her town.

2 Comments on “Video: Fighting to save a North Country prison”