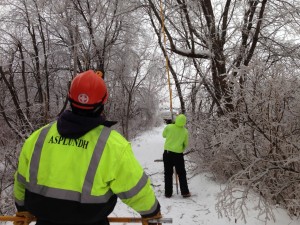 Update 5:51:  I drove from Albany up through I-87, then through Keene Valley and the Cascades a short time ago.  Heavy icing on trees, some downed branches.  Advanced emergency power and road crews positioned in many places, but power on in most places.  Meanwhile, hard intermittent rain in the Tri-Lakes area as the temperature is now dropping below freezing.  –Brian Mann, NCPR

The St. Lawrence Seaway is closed at St. Lamberts Lock – via Boatnerd.com

Update 4:23 pm: St. Lawrence County is lifting its travel ban at 6pm this evening, but travel is still discouraged. The state of emergency remains in effect and operations centers are still open. According to county Administrator Karen St. Hillaire:

Many areas of the county have been hit hard with damaging amounts of freezing rain, downed trees and power lines. This is especially true in the Southern and southeast portion of the county. The winds, additional sleet and now plummeting temperatures are causing additional issues with the ice covered trees and power lines. There are still over 3,000 without power in the county as of this release.

Meanwhile, Jefferson County is the area that’s been hit hardest by this storm. More than 20,000 homes are without power there, according to National Grid. And officials are watching the Black River, which is under a flood watch.

The official Vermont outage website says there are about 17,000 people without power there, mostly in the Northeast Kingdom. A shelter is open at the Enosberg Falls High School.

Whiteface Mtn. in Lake Placid had to close today due to loss in power.

Meanwhile, southern Ontario from Toronto to Kingston to Ottawa is also severely debilitated. According to the Canadian Press, comparisons are being made to the ice storm of 1998:

“Some of the crews I’ve spoken to said this is as bad,” said Blair Peberdy, vice-president of Toronto Hydro, which had 250,000 customers without power.

“It’s certainly a bad situation. These storms tend to wreak havoc and we have to go street by street with chainsaws.”

Shelters are open in Cape Vincent at the recreation park, fire departments in Alex Bay, Chaumont and Brownsville, and at the Dexter American Legion hall.

pdate 8:45 am Sunday. National Grid reports more outages in Jefferson and St. Lawrence counties. The company estimates power will be restored by 8 pm  in St.Lawrence County, 11:30 pm in Jefferson County.

NYSEG reports some 500 out in each of Clinton and Franklin counties, 59 in Essex County.

A flash flood warning is posted till 11 am in southeastern Clinton and northeastern Essex County.

Update, 6:10 am Sunday: National Grid reports thousands without power This morning, mainly in Jefferson and St. Lawrence counties. Outages are heaviest in the Watertown and Thousand Islands areas. Forecasters predict up to another third of an inch of ice in that area. National Grid spokesperson Karen Young tells the Watertown Daily Times the company has the largest crew out working sinthe massive ice storm of 1998. 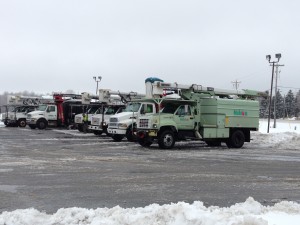 Update, 6:33pm: More than 10,000 residences in the North Country are without power, many of them along the St. Lawrence River in northern Jefferson County. About 1,000 are without electricity in Clinton and Essex counties. You can find the power outage maps for National Grid and NYSEG here.

Update: 5:00pm: New York State has declared a “winter ice storm emergency” for the North Country and activated Emergency Operations Centers in St. Lawrence, Franklin, and Clinton counties. Those three counties, plus Essex, have issued state of emergency. According to the press release from the Governor’s office:

Jerome M. Hauer, Commissioner, New York State Division of Homeland Security and Emergency Services said, “We have been in touch with the counties that are in the track of the storm and several will open their local Emergency Operations Centers (St. Lawrence, Franklin & Clinton counties), which will also include staff from our Division’s regional Emergency Management offices. The counties have been in touch with local utilities and county/state DOTs. In addition, state stockpiles will be ready to deploy generators and other supplies as needed.”

A potent mix of sleet, freezing rain, and ice is bearing down on the region today. We’ll keep posted any updates on conditions here, so keep checking back.

The National Weather Service has issued an Ice Storm Warning for Jefferson, Lewis, and Clinton counties, southwestern and the northern half of St. Lawrence county, northern Franklin county, Clinton, and the Champlain Valley of Essex county, as well as Burlington and northern Vermont. The heaviest ice accumulations are forecast for northern Jefferson county, the Gouverneur and Ogdensburg areas of St. Lawrence county, and the Plattsburgh area.

SIGNIFICANT AMOUNTS OF ICE ACCUMULATIONS WILL MAKE TRAVEL DANGEROUS OR IMPOSSIBLE. TRAVEL IS STRONGLY DISCOURAGED. IF YOU MUST TRAVEL…KEEP AN EXTRA FLASHLIGHT… FOOD…AND WATER IN YOUR VEHICLE IN CASE OF AN EMERGENCY. ICE ACCUMULATIONS AND WINDS WILL LIKELY LEAD TO SNAPPED POWER LINES AND FALLING TREE BRANCHES THAT ADD TO THE DANGER. 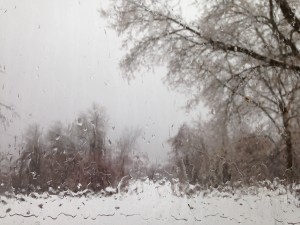 Ice on the window at my house this morning. Photo: David Sommerstein

Jefferson and St. Lawrence counties have issued travel advisories, and several minor accidents have been reported.

A Freezing Rain Advisory is in effect for much of the Adirondacks, where temperatures are warmer this morning, in the 40s. The southern Adirondacks are under a Flood Watch, with rain in the forecast.

You find lots of observations from the ground (and a couple ominous references to the near 16th anniversary of The Ice Storm) from our listeners on our Facebook page.

And we are tracking closings and cancellations on our closings page. This list is not complete. Call ahead to make sure your event has not been cancelled before going out on hazardous roads.

1 Comment on “Ice storm emergency continues across the North Country”