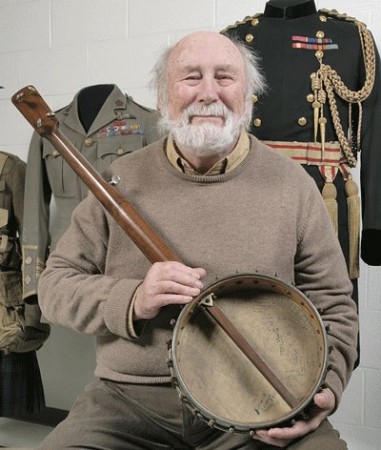 This story just resonates on many levels. It’s about a chance discovery that included a mystery – partially solved through luck, skill and perseverance. The tale combines history writ large and humanity on an individual level. There’s geography, detective work and plain old music – as traced through the lens of curiosity and compassion. What’s not to like?

It all began about two years ago, when Alec Somerville noticed a listing for decrepit old banjo in Northern England. Now 83, Somerville, is a former resident of Ontario where he was once the deputy police chief of Windsor. A well-known banjo player himself, Somerville lives in Ireland. (See him singing and playing here.)

As Somerville recounted to CBC’s Stu Mills this past Tuesday:

“…there were two photos of it, pretty flakey ones. One from the front and one from the back. If you look to the back one, I could see there was writing in there. And there was enough that I could read Regina, Sask. – which only means one thing. “

Intrigued, he called the seller and got him to describe was was written behind the banjo’s drum head.

“And it was like Baedeker’s Guide to Canada. Starting in British Columbia and ending in New Brunswick.”

It’s a very engaging interview, complete with Somerville playing a similar-vintage banjo at the end. Listen to the whole thing here, it’s just under twelve minutes.

The story continues courtesy of this press release from the Canadian War Museum, the banjo’s new home. After buying the banjo, Somerville noticed…

…“Paris, Aug 24th, 1917,” written twice on the reverse of the banjo head, he speculated that a group of Canadian soldiers had left their mark on the instrument while serving overseas during the First World War.

That theory inspired a quest to find out as much as possible about the banjo and the men who inscribed it with their names and hometowns. Somerville, himself an armed forces veteran and retired police officer, began his sleuthing by deciphering the signatures, many of which were faint and smudged.

Through his research and conversations with descendants, Somerville uncovered many of the soldiers’ personal stories: where they came from and, in many cases, their fates after the war. The servicemen who signed the instrument came from almost every province. About half were born in Canada, and the rest were immigrants from England, Wales, Jamaica and Belgium. One came from the Six Nations of the Grand River near Brantford, Ontario and another was the uncle of Roland Michener, who served as Governor General of Canada from 1967 to 1974.

What can I say? It’s a great story. You can read about it in this account from the Ottawa Citizen’s Peter Simpson, which includes no less than 14 good, detailed photos by Ashley Fraser. And the whole history has yet to be uncovered:

A question that won’t be answered is how it got from Paris through the war and the decades to England two years ago. The chap who sold it to Somerville said he found it while clearing out an old house.

How fitting that the banjo will forever retain the soft resonance of a mystery unsolved.

The instrument is also of interest, if no longer in playable condition. Again, from the War Museum press release:

The banjo itself is a traditional five-string, open-backed instrument with a walnut neck and an ebony fingerboard, the top half of which is missing. The goatskin or calfskin head — the proper name for the “drum“ stretched across the banjo’s round body to reflect the sound — is worn through at the edges. The violin-type friction tuning pegs are made of plated brass, and some of the original tension hooks (the metal rods that hold the head taut) have been replaced by homemade ones.

The banjo will be on display for a short while in the Canadian War Museum, in the LeBreton Gallery, through January 27.

Hats off to Alec Somerville for making that all happen!