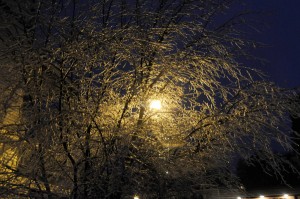 Shelters/warming centers are open within Jefferson County, in Watertown at the high school, and at fire departments in Sackets Harbor, Three Mile Bay, Alexandria Bay and Henderson. The Dexter American Legion is also open. Cape Vincent Fire Station, and the station at Alexandria Bay are ready to be used as shelters as day turns into night at more people are in need of warmth.

State Police, the County Sheriff and 30 troops from the National Guard are currently going door to door in crews around the Gouverneur area checking on people to make sure they’re okay. This is the area that was the hit the hardest; some people have been without power in that region for 24-36 hours. Pitcairn, Edwards/Fowler, Gouverneur, Rossie, Macomb, were hit hardest by the storm.

There are warming centers open in Gouverneur, Edwards and Colton. Tonight those areas can be converted to shelters if needed.

The door-to-door crews are also making sure people are using their generators properly, not using them inside, being sure to air them out, and not using improper heating devices.

There are an estimated 7,000 people in St. Lawrence County still without power right now, 9. 278 in Jefferson County.

And that could continue for a while, because temperatures are supposed to go below zero tonight so the ice won’t be going anywhere.

Warming center information: The warming center in Gouverneur is at the high school. In Edwards, it’s at the senior center, and in Colton, it’s at the Colton-Pierrepont High School. Again, if necessary, those centers can be used as overnight shelters.