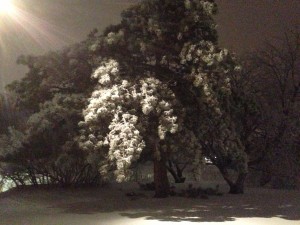 Outside the radio station this morning, 6 am. At least the lights are on! Photo by Martha Foley

About 3 o’clock Saturday afternoon I was outside cutting some cedar branches for a wreath. It was raining lightly and seriously dim and dreary-looking.  Ice on everything: trees, twigs, cars, clothesline.  And as I was standing there, thinking I was nuts to be outside at all, I heard two overlapping sounds: the fire whistle, and a crack-and-shatter from the woods.   Eerie and very chilling for anyone who lived through the “big” ice storm in January 1998.

So, I stood there in the rain, listening for more. And there were a few more cracks and snaps, a few sounds of “something” coming down somewhere. But it stopped, in my woods anyway.  That was one big difference, for me, between this weekend’s storm and ’98. That sound just went on and on in ’98. It could make you cry, really, to hear tree after tree give it up.

I could go on and on, as could the rest of the old-timers who were here in ’98. And of course, it was tempting to project THAT disaster onto this one. But weather aside for a moment, in the area of emergency preparedness on the part of utilities, municipalities and households, I have to believe we are much better off now than then. Then, it was horrific:

That’s the introduction to a documentary (and CD) we produced in 1999…one year after. It goes on:

But not quite. Overnight, volunteer shelters took in thousands of people whose homes were cold and dark. The National Guard lent a hand to fire departments, schools, churches and innumerable organizations mounting local relief efforts. Neighbors helped neighbors in a remarkable spontaneous generation of survival strategies, sharing food, fuel and comfort.

We made a T-shirt!

Here’s a link to a re-do from the 10-year anniversary. Unfortunately…the audio clips are in an old format not everyone can still plat. There’s a link on the page, though, to an mp3 file of the full 58-minute CD if you’re so inclined.

And here’s a quicker treatment we produced last year for the 15th anniversary..which should work!

The first plow coming down Boyden Rd., Canton. I think it was a week after power went out. Photo by Martha Foley

Anyhow, for people who weren’t here in ‘98: …then, Niagara Mohawk LOST most of the main distribution lines into the region. NiMo guys we knew said they couldn’t believe. Totally out. Never happen!! So restoration of power started from the top down, and it took three weeks before all the last wires to the last house were up. The Alexandria Bay area was the last to come back on line. Power was out at my house near Canton for two weeks.

Thousands of old utility poles simply snapped, like dominoes down the roadside. This, today, is bad. But not as bad as that.

So, my heart goes out to people (some 30,000 still) still without power this morning. David Sommerstein’s heading to the warming shelter at Gouverneur High School this morning, to see how folks there are faring. You can follow Jefferson County Emergency Services on Facebook.

Or call, their non-emergency number: 315-786-2654. Shelters are open in Cape Vincent at the Recreation Park, fire halls in Alex Bay, Chaumont and Brownsville, and at the American Legion in Dexter.

Other than prompting hugely improved emergency preparedness in most areas, the true silver lining of the ’98 experience was the way people helped people. Truly amazing. So take heart, and take care. And remember, not everyone has Internet this morning to “follow” what’s happening on Twitter or Facebook. Check on your neighbor.