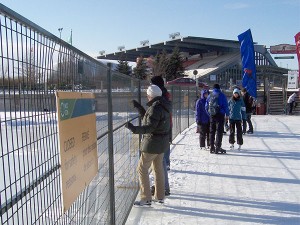 Skaters must wait a little longer for the Rideau Canal Skateway to open. Photo: Lucy Martin

An earlier post in All In looking for the bright side of early cold temperatures turned out to be overly-hopeful in regards to skating the Rideau Canal Skateway before the new year.

Yes, it has been cold. But not every single day. And it’s also been snowy. Really snowy. We are talking about lots of heavy, insulating snow. According to this CBC item from 12/24: “Ottawa has already seen 110 centimetres of snowfall so far this winter season, nearly half the annual average for the city.” (That’s over 43 inches.)

Thanks to those factors, canal ice is still not ready for eager skaters. As reported by the Ottawa Citizen:

National Capital Commission spokesman Jean Wolff said some of the ice’s thickness was lost last weekend due to higher temperatures, snow and freezing rain, The ice’s building crew was back on the surface Thursday after having Christmas Day off, looking to make up lost ground, Wolff said.

“The amount of snow actually was so heavy that it broke the ice in many parts,” Wolff said.

So, are there any current predictions?

“The target is what the weather will give us,” he said. “Any day that the skateway is open, there is an average of between 17,000 to 22,000 people that go and take advantage of it, so it is a point of pride to open it as early as possible,” he said.

As usual, nature does what it will. Until then, we wait. Once the canal is open, conditions can be checked here. 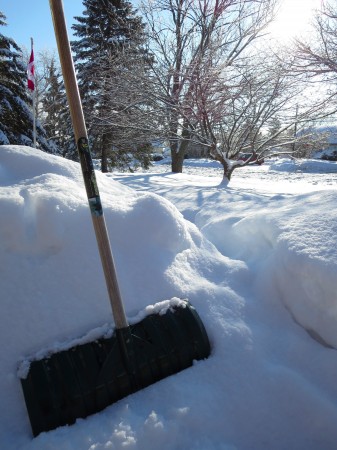 There will be ice under all that snow – eventually! Photo: Lucy Martin