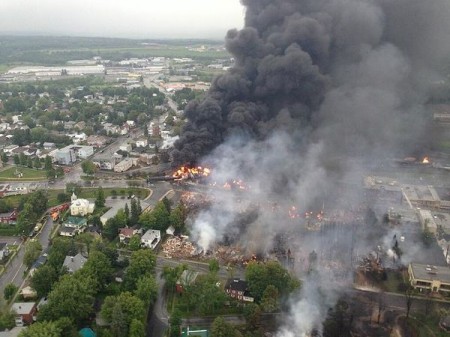 This is the time of year when news organizations draw up lists, pick people of the year and so forth. Rituals that may or may not have any value. Be that as it may, 2013’s top news stories in Canada combine farcical excess with true, profound tragedy.

The Canadian Press organizes story-of-the-year voting among editors and news directors here. According to that effort, 2013’s top news stories for Canada were: Lac Mégantic, the so-called Senate expense scandal and the antics of Toronto Mayor Rob Ford. [Note: the voting went like this: 31%, 24% and 23%, with numbers rounded up to the nearest percentage point.]

From the CP’s Andy Blatchford:

“The Lac-Megantic disaster was one which caused everyone who lives in a small Canadian city, or town that has freight trains rumbling through it, (to) stop and ponder, ‘That could happen to me some day,’ ” said Murray Guy, assistant managing editor for the Times & Transcript in Moncton, N.B.

“From the sheer enormity of the death, destruction and upheaval for a small community’s way of life, to the shaken trust we all have in our rail safety laws, Lac-Megantic will likely become a red-letter day in the world of railway safety.”

Adrienne Tanner, deputy editor for the Vancouver Sun, said, “Disasters don’t get any bigger. A human tragedy with a lot of political and policy implications going forward.”

The moments leading up to the inferno are recounted by Susan Dominus in the current New York Times “The Lives They Lived” retrospective, memorializing the “Regulars of the Musi Cafe“.

The Senate scandal is one of those lengthy, tangled soap operas that isn’t over yet. And one hardly need say anything about Mayor Rob Ford — just watch the late-night comedy shows.

2013 was the sort of year that might make Canadians pine for a more-typical reputation as a country that’s boring and well-run.