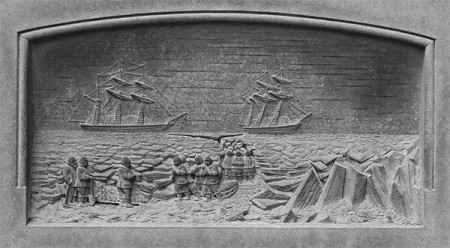 Here’s a follow-up to earlier posts about the Franklin Expedition. For those who haven’t followed that long-running historical mystery, it’s easily understood that two well-provisioned British ships set off in 1845 off to explore the Arctic and look for the Northwest passage. But – ultimately – both ships and the entire crew of 129 perished, leaving only a few known graves and tantalizing clues behind.

Much energy has been directed toward understanding what when wrong and where any remains may be. Indeed, Parks Canada is still looking for the wrecks in Arctic waters.

New research suggests that theories about lead poisoning (from improperly-tinned food) may not be as significant as once thought. Here’s more from a January 8th University of Glasgow press release:

Fresh analysis of forensic and other historical data by University of Glasgow scientists has cast new light on the fate of Captain Sir John Franklin’s Royal Navy expedition to find the Northwest Passage nearly 170 years ago.

The disappearance of the “Franklin expedition”, which set off in 1845, made international headlines and led to the biggest search and rescue mission in history.

Twentieth-century analysis of ice-preserved remains found high levels of lead, prompting  the theory that lead poisoning caused by inexpert soldering of the expedition’s tinned provisions had played a significant role in the catastrophe by causing widespread death and debility.

Now, a reappraisal of that theory is taking place as a result of further research carried out by Professor Keith Millar of the College of Medical, Veterinary and Life Sciences and Professor Adrian Bowman of School of Mathematics and Statistics at the University of Glasgow, and their colleague, the archaeologist and author William Battersby.

Their analysis, published in the journal Polar Record (Cambridge University Press), has shown that whilst levels of lead in the crew were high relative to today’s levels, they may not have been exceptional in lead-contaminated 19th century Britain where lead poisoning was not uncommon. Using statistical estimation, they also showed great variation in lead levels amongst the crew which is similar to that seen in present-day, lead-exposed workers.

From this, they conclude that although a proportion of the 129 men may have suffered symptoms of lead poisoning – much as in the contemporary land-based population – the physical and mental state of others would have been largely unaffected, at least while their general health remained good.

This finding, linked to other historical evidence that suggests the crew suffered no serious debility until their provisions began to run short after more than two years in the Arctic, may justify a reappraisal of the supposed central role of lead poisoning in the disaster, suggest the team.

It is now known that the expedition had the misfortune to set out at a time when, according to ice-core analysis, Arctic climatic conditions were unusually harsh. The two ships involved in the expedition to find the Northwest Passage – HMS Erebus and HMS Terror – became trapped for two winters in a region so remote that neither rescue nor escape was possible.

“The failure of the Admiralty to equip the crew adequately in the event that the ships had to be abandoned, and delay and miscalculation in organising the rescue mission, sealed their fate as they attempted an overland retreat that was beyond their capability,” add the team.

The Canadian Government agency Parks Canada conducts an annual summer search for the expedition’s missing ships. Their eventual discovery may provide definitive answers to the Franklin mystery, suggest the researchers.

The full article is behind a pay wall, but an abstract of the findings can be found here.

2 Comments on “Update on the Franklin Expedition mystery”