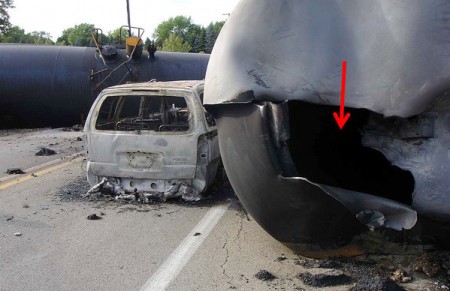 A photo from a National Transportation Safety Board powerpoint from 2012 shows how DOT-111 tankers can puncture. Photo: NTSB.

The issue of rail safety continues to be large and complex. This past week the Canadian Press reported:

The federal department also reissued a new emergency directive on Jan. 1, again without public notification, covering those rail companies that are not part of the Railway Association of Canada.

The article discusses some specifics about Canada’s new safety standards and looks at a number of “big picture” questions – including the possibility of new rail safety regulations coming soon in the U.S. and the difficulty of implementing changes that may be required:

In fact, the integrated North American rail service means all shippers will be caught in the same supply-and-demand dilemma should new tank cars be required.

That’s because it will be a tall order to build enough new, stronger tank cars, said Larry Beirlein, a Washington-based lawyer with the Association of Hazmat Shippers, which provides regulatory legal advice to industry on the full gamut of hazardous materials, from gas cylinders to refineries to nail polish.

“You not only have very few builders of these kinds of cars, there are even fewer installations that could modify them,” he said in an interview.

“With thousands of cars across North America, I don’t think anything significant could be done in less than 10 years because of the backlog.”

As reported by the Minneapolis Star Tribune, pressure for improved regulations is mounting in the U.S., and Transportation Secretary Anthony Foxx stated his department would announce steps to improve safe transportation of hazardous material “in the coming weeks”.

1 Comment on “Rail safety – if more rules are needed, who should write them?”