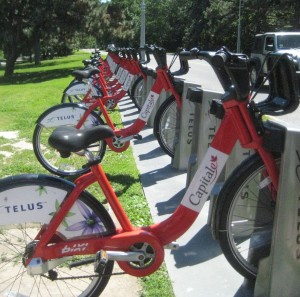 What if visitors and residents in key urban areas could grab, ride and return a bike – fast and easy – for a reasonable fee?

That’s the idea for a variety of fairly new enterprises in places like Montréal, Ottawa and New York City. Karen Kelly tried out Ottawa’s Bixi rental system for NCPR back in July of 2012.

As you might expect, there are pros and cons for the idea in theory and even more wrinkles in practice. Kelly found parts of Ottawa’s system confusing or inconvenient, for example. And bike stations in NYC have also spurred some criticism, as reported in the New York Times last May:

Bike share was easy for New York City to love in the abstract. It was not about adding bike lanes at the expense of something else; it was about sharing something that did not yet exist.

But with the program two weeks away, many New Yorkers have turned against bike share, and for one simple reason: They did not expect it to look like this.

But now the crucial issue is financial. As reported by the CBC the parent company recently filed for bankruptcy protection:

The company that ownsBixi — the Public Bike System Company, known in French as the Sociétéde vélos en libre-service(SVLS) — owes $50 million to various creditors, including the City of Montreal.

Coderre said rather that sinking more money into the SVLS, a private company, the city would take over Bixi’s Montreal assets. He said they are worth approximately $11 million.

It gets worse for Montréal taxpayers, as reported for the Montréal Gazette by Any Riga:

Bixi was not supposed to cost them a cent but Montreal taxpayers could be on the hook for tens of millions of dollars, the city admitted Monday.

If you’re curious how company debt could run into the $50 million range, Forbes has more about that here, including sums owed in New York City and Chicago.

The story is slightly different in Ottawa, as explained in additional CBC coverage:

The National Capital Commission owns the 250 Bixi bikes and 25 Bixi stations, but the Montreal company has a contract to run the program until the end of the 2015 season.

“It’s too early to talk about impact … We’re pretty sure it will start as scheduled,” Wolff said.

Wolff said the program has been a success in terms of rising ridership, but concedes it hasn’t made any money.

The NCC has been trying to get some other entity to take the program over, but so far there have been no offers. It plans to go ahead as scheduled to start this year’s program on April 15.

This is not a time of year when many thoughts turn to noodling about on bicycles. But this development indicates the goal of encouraging easy cycling options may be easier to envision than to implement.