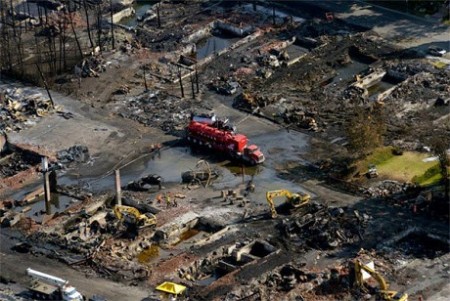 Emergency service crews at work in the blast and fire zone of Lac-Mégantic in July, 2013. Photo: Sureté du Québec

The recommendations come after July’s Lac-Megantic disaster, which killed 47 people. An investigation by NCPR’s David Sommerstein last October found that the rail company CSX has been shipping hazardous liquids like crude oil through Canton and other towns on its Massena line using tankers federal regulators deemed “inadequate” 20 years ago.

In a statement this morning, North Country Congressman Bill Owens,who’s been urging railroad administrators to address these issues, responded to the recommendations thusly:

As we seek energy independence, we must make sure we are taking commonsense steps to protect communities near railroads where trains carry crude oil.We can find a sensible way to protect the public and the environment that allows businesses using our rail infrastructure to expand and create jobs. The NTSB’s coordination with their Canadian counterparts on these recommendations is a promising step forward. I will review these recommendations closely and continue working with my colleagues to make sure crude oil and other vital economic resources are safely transported on America’s railways.