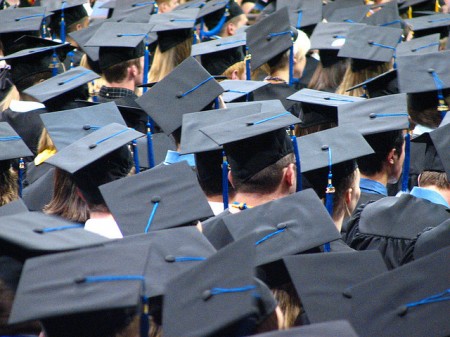 It looks like St. Lawrence County high school kids are graduating at a higher rate than the state average. On Monday, the state Board of Regents and Education Commissioner released the high school graduation rates for the 2008 cohort (that’s the class that began in 2008 – full report here.) The Daily Courier-Observer parsed the data.

Eight St. Lawrence County schools reported that 90 percent or more of the freshmen that entered high school in 2008 had earned their degrees by August, 2013. Heuvelton graduated 93 percent of its 43 students and had the highest graduation rate of all St. Lawrence school districts.

On the down side, Massena, Edwards-Knox, and Hammond maintained graduation rates between 76 and 79 percent, making these schools closer to the statewide average.

At Edwards-Knox, 11.8 percent of the 34 students in the 2008 cohort dropped out. In a close second, Ogdensburg Free Academy experienced a 11.7 percent dropout rate.

With a 75.6 percent graduation rate, Massena reported that 11 percent of their 217 students in the 2008 cohort dropped out of school before August 2013.