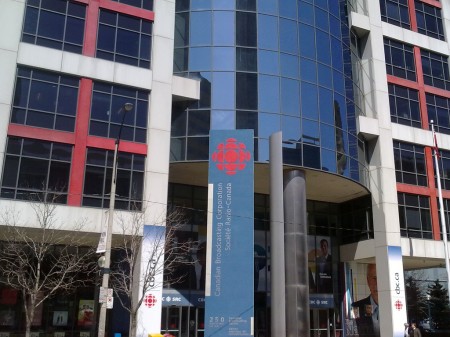 Big questions facing all “content” companies: What do users want – and how should it be delivered? CBC Building, Toronto. Photo: nav1SK, Creative Commons, some rights reserved

Some of you use CBC content and some of you don’t. But major changes just announced by the CBC will certainly affect future programing.

Today at least, the most detailed reporting on this is coming out of CBC news: CBC to cut back supper-hour news, in-house productions: Corporation will have up to 1,500 fewer employees by 2020.

Here’s how that pivot was summarized by CEO Hubert Lacroix:

Of course the CBC has a long list of fans and critics, and constant quarrels about budget priorities. There’s no shortage of suggestions on what might make it better, as can be read in the Globe and Mail piece on re-imagining the CBC.

On a broader level, this is yet another example of the big “evolve or die” conundrum besetting so-called old media.

Many changes have already happened in the world of news and content, with many more to come. But the crystal balls remain foggy about which ones will work and which ones won’t.