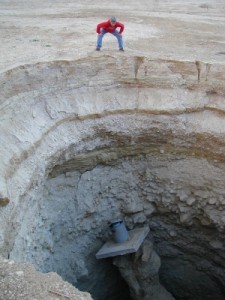 This 1977 photo is described as “Dead sea ecological disaster – Sinkholes”

Every so often some new sinkhole makes the news.

This week the local hole worth knowing about opened up in West Quebec and closed Highway 148 between Luskville and Quyon.

That got me poking around the Internet on the subject of sinkholes in general.

Here’s a graphic from Canadian Geographic on how they form. That page included links to a few notorious sinkholes, like the one that shallowed cars at the National Corvette Museum.The Corvette Museum reportedly plans to keep their sinkhole, apparently it’s become a big draw.

Then there’s the big gulp of this watery sinkhole that just sort of eats trees.

A sinkhole in downtown Ottawa last February was linked to tunneling for the construction of a new light rail project.

But why stop there? Here’s a round up from ABC news of impressive sinkholes from around the world. And a Q&A from the UK’s Independent asking why we seem to be seeing so many of them all of a sudden.

Need more? How about memes on what caused a recent sinkhole in Malaysia (Godzilla, among others) including yet one more use for duct tape.

…an activity, concept, catchphrase or piece of media which spreads, often as mimicry, from person to person via the Internet.[1] Some notable examples include posting a photo of people lying down in public places (called “planking“) and uploading a short video of people dancing to the Harlem Shake.

Of course, some might say the Internet is just a giant mental sinkhole. But it can be fun sifting goodies out of the muck.

On a more sobering note, we may be in for more problems of this nature, considering the interplay of humans and their sprawl combined with more flooding and more frequent heavy downpours.

4 Comments on “The science – and silliness – of sinkholes”