Weather permitting, Tuesday afternoon will be when “just folks” can take a last, up-close look at the old North Channel portion of the Seaway International Bridge in Cornwall, Ontario. (A new, low-level bridge was opened to traffic last January.)

According to this press release:

The Seaway International Bridge Corporation, Ltd. (SIBC) in collaboration with The Federal Bridge Corporation Limited (FBCL) invites all members of the community to walk the old North Channel Bridge and view the historical photos that will be set up on the bridge for the occasion.

This special community event will feature a brief commentary on the history of the old bridge, its replacement with the new North Channel Bridge and the planned demolition.

The public community event will take place on Tuesday July 8, 2014 from 2 pm to 8 pm weather permitting. The rain date is set for Wednesday July 9, from 2pm-8pm.

This is a pedestrian only event. Individuals who require a mobility aid will be permitted to access the bridge.

This week’s walk-about comes ahead of further work to tear down the 52-year-old North Channel Bridge. According to the Ottawa Citizen:

The project includes removal of the bridge deck, steel superstructure and some, but not all, concrete piers. The company estimates it will complete demolition by the end of June 2016.

It’s the third phase of four in the $75-million federally-funded project, announced in 2010.

It’s not every day bridges like this are opened for pedestrian use only. So on that level alone, it’s worth checking out. In addition, though, the Cornwall crossing has been – and continues to be – a source of acrimonious friction.

It’s tough to live smack on the border. Even more so if the original culture once had unfettered access to both sides of the river. As we all know, Canada and the U.S.A. have heightened security policies with an eye toward containing terrorism, smuggling and crime. But check points designed to address those broader concerns have a significant negative impact on ordinary life for area residents, be that Cornwall Island or places like Derby Line, Vermont.

NCPR’s David Sommerstein has covered that issue over the years. Back in 2010, that conflict was particularly fractious for residents of Kawehno:ke (Cornwall Island) and the Canadian Border Services Agency (CBSA). 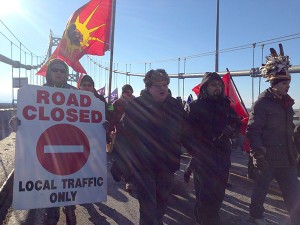 Mohawks and supporters crossing the old Cornwall bridge during the “Idle No More” march in January 2013. Photo: David Sommerstein

The opening of the new span in January of 2014 still failed to satisfy many local concerns. At that time NCPR reporting pointed out that crossing requirements create “a bottleneck“:

…Grand Chief Mitchell says it [the new bridge] does nothing to resolve that biggest problem – that Mohawks have to cross a bridge three times just to get home or to pick up the kids at school. He says if they don’t, even if they just stop on the Island to go to the bathroom because there’s a long wait on the bridge ahead, Canada will seize your car.

There are positives as well: the new bridge is credited with being shorter and far less expensive to maintain.

Meanwhile, this week’s special event remains a rare opportunity to walk the old North Channel Bridge before it is pieced out to the scrap heap.