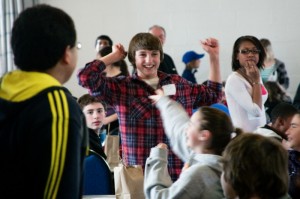 Earlier this week the most emailed story from the New York Times asked “Why do Americans stink at math?”

Numbers that indicate mediocrity at best come from sources like the Programme for International Assessment, or PISA. Their 2012 assessment of math competency for 15 year-olds (in 65 countries) ranks Canada in 13th and the U.S. in 36th place.

The problem is fairly visible but solutions remain elusive.

Many fault how math is taught, including Glen Whitney, a key founder of the National Museum of Mathematics. Located in New York City, “MoMath” is the only one of its kind in North America – in contrast to Germany, which has several math museums. Other countries with math museums include Japan, South Korea, Italy, Spain, Japan and Hungary. (Of course, many museums and similar institutions in the U.S. include material that is very much related to math.)

Interviewed by Molly Petrilla for Smart Planet, Whitney expounded on ways math gets misunderstood, or improperly presented, in the U.S.:

In the roughly 2,000 hours of math instruction you get in traditional K-12 school, you get a non-representative view of what mathematics as a human enterprise is like. You learn that every problem has a specific method, and it’s just a matter of matching up the problem to the method. If you follow that recipe, you will get the one correct answer. There’s no sense of creativity or imagination or beauty or exploration. I think exploration is at the core of what mathematics is as an enterprise.

There’s also this impression that math is utterly linear. If you reach an obstacle — whether it’s something you find difficult or just don’t like — under the linear model of math, you’re done. You can’t proceed. Math must not be for you. That image is wrong. Mathematics is actually extremely bushy. There are so many different areas, and there’s no need for people to feel that if they don’t like one area, then they don’t like math at all.

In a separate NYT Op-ed, math teacher Jordan Ellenberg says a good place to start is to make engaging games out of various math concepts.

For all the excitement around using math creatively, some would counter that better grounding in plain old fundamentals can’t hurt either. As different generations are exposed to new math, newer math or (most recently) common core math, an immense source of frustration comes when parents cannot understand content well enough to help kids with homework. NCPR’s David Sommerstein blogged about this in 2012 — see if you can handle his daughter’s first grade math work.

Of course, complaints that the young leave school poorly educated are not confined to low math skills. This is part of the bigger problem of what should be taught, how does that happen best and who’s going to make any of that happen?

But sticking to math, do you see a problem? How would you fix it?