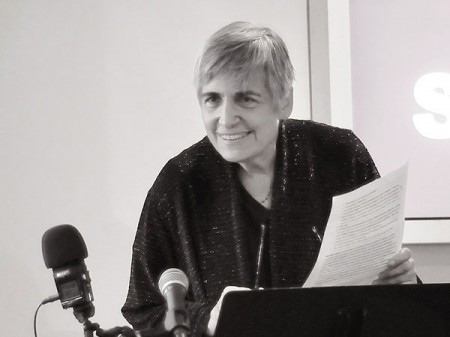 A lot of years ago now, I went to New York City to work for a season in NPR’s Manhattan bureau.

I partnered with some great journalists there–Jim Zarroli, Mike Pesca–but it was Margot Adler who welcomed me, propped me up, and made me feel at home.

She was a true New Yorker, deeply versed in her city, passionate about its tensions, its challenges, its beauty.

Margot, who passed away on Monday after a fight with cancer, also exemplified that weird truth about people in the city.

Despite their sometimes caustic reputation, residents of the five boroughs tend often to be warm, welcoming, curious, and weirdly excited by people (like myself) who share their love of that extraordinary community.

Honestly, that was a tough time for me. I was on deadline a lot, chasing unfamiliar stories, wrangling with technical problems and unfamiliar, sometimes thorny editors. I felt like my stories just weren’t connecting.

Through many of those muddled, hectic, stomach-clenching days, Margot was my human connection. It wasn’t a lot. After all, she was busy, too, on deadline chasing much bigger stories than mine.

But every day there was a word, a five minute conversation about nothing-much, some creative feedback, a bit of laughter.

In the years since, Margot and I talked and corresponded occasionally, usually when our paths crossed professionally.

Sometimes it was all business. When I covered political stories that touched on the city, she’d send me a note about some detail, like getting an interesting “robocall from Mayor Bloomberg” that she thought I should know about.

She’d give me the inside dope on people’s feelings about Rep. Charlie Rangel, a politician I’ve covered from time to time. (Margot lived in his district.)

But then she’d pivot and chime in about her garden: “I have a community garden plot but I only grow cherries [as in cherry tomatoes] there, at least if I want a reasonable crop.”

And sometimes when I would do something she liked, Margot would send a note of support.

“What a wonderful reporter’s notebook,” she wrote, after I covered a particularly painful shooting in Binghamton.

“I loved the fact that you said you were not religious and that you believed in memory,” she added.

After a big election night back in 2006, we were both on assignment covering late returns (I was tracking Kirsten Gillibrand’s first big House victory in the North Country).

When the work was done and our stories filed, Margot thought out loud –in an email to me from New York City– about her own political awakening.

“When I was 18, I was in the free speech movement at Berkeley, and we won,” she wrote. “And it made me a totally glass half full person, forever, although I have been sorely tried in the last 25 years.”

That sensibility informed her reporting, I think, and her absolutely brilliant style of storytelling–optimistic, curious, but also skeptical.

I think maybe it was also what made her so compassionate and generous toward myself, a younger, much less confident and less skilled journalist.

Public radio listeners are the poorer for Margot’s passing. Those of us “inside” public radio also lost someone of grace, someone who had the capacity to inspire us and make us all a bit better.

4 Comments on “Margot and Me”