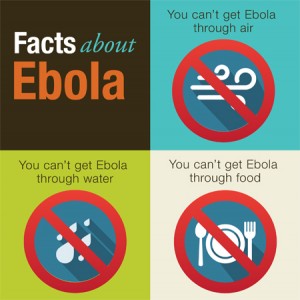 Infographic on Ebola from the CDC, which has more information here.

As anyone following the headlines knows, there’s a serious outbreak of Ebola in West Africa. The World Health Organization is calling Ebola hemorrhagic fever an “extraordinary event” serious enough to be an International health emergency. According to a WHO statement:

Countries around the world, including the U.S. and Canada, are reassuring their populations that experts are on alert and stand ready to contain the danger.

Here’s one such recent article from the CBC titled: Ebola outbreak: How Canada’s prep has ‘lead the world’:

“I’m not concerned. I already know that Canada is prepared,” said Jason Tetro, a microbiologist and author of The Germ Code, who recently penned the blog entry Canada, Don’t Worry About Ebola in the Huffington Post.

The assurances are even coming out on local levels, as with this response plan for Ottawa.

As a believer in Murphy’s Law, I sort of wish those assurances came with greater caution and humility. (As the skit from Monty Python puts it: “Nobody expects the Spanish Inquisition!“) But, inappropriate levity aside, I do worry about the trap of hubris.

Yes, yes. Canada and the U.S. typically have far better resources to prevent outbreaks and improve the outcome against these challenges. Canada feels it gained regrettably-useful experience in 2003’s severe acute respiratory syndrome (SARS) outbreak – better ways to identify, isolate and treat contagion. No deaths were attributed to SARS in the U.S. during that outbreak. There were over 40 SARS deaths in Canada, primarily in Toronto. (Some sources say 43, others 44.)

In the U.S., the Centers for Disease Control and Prevention (CDC) has this FAQ on safe management procedures for potential Ebola cases that sounds pretty straightforward. (Small aside: Ebola is named for the Ebola River and as such should be capitalized.)

But there is such a thing as underestimating the so-called enemy. Consider: for all the supposedly superior standard procedures in Canada and the U.S., hospitals here have had enormous difficulty in containing other stubbornly persistent problems, such as C. difficile.

Still, there is a valid question of proper perspective. Ebola is a serious, frightening disease, and real people are dying of it right now. But it’s also getting lots of media hype, according to this hysteria-debunking essay by Michael Fumento, who has made something of a career as a de-bunker:

This is only the deadliest outbreak of Ebola Virus Disease because past ones were so tiny. At this writing, there have been 1,711 reported cases in Africa and 932 deaths. That’s too many. Still no suspected cases that didn’t originate in those four countries and mortality rate remains 55 percent.

But every day about 600 sub-Saharan Africans die of tuberculosis, and contagious diarrhea claims the lives of 2,195 children, the vast majority of them in sub-Saharan Africa. Malaria kills twice as many people each day as Ebola has been killing.

Toss in syphilis, AIDS and lots of other diseases that routinely kill more people than Ebola is right now.

And, should Ebola come to America, it’s vanishingly unlikely to “break out.” Ebola is a lazy spreader. Even a cough or sneeze or sweat from an “active” case is harmless. Spreading the virus requires contact with large doses of bodily secretions such as blood or vomit.

Maybe there’s just a collective fear that the black death of medieval times wasn’t a one-off. That humans are periodically visited by diseases they can’t initially control, like the terrible flu pandemic of 1918-19. We carry the boogie-man of sudden, mass death in our subconscious. A primal dread that’s easily ignited.

Still, do you think we’re getting better at facing new threats, fully prepared? Or are we usually fighting the last medical war, fully ripe for new lessons?