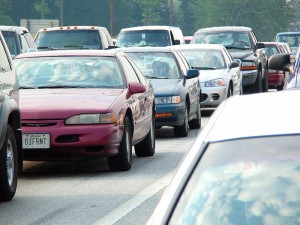 Traffic jams – a norm of modern life. Should they be?   (Image source: U.S. Census Bureau)

Sometimes we’re just fish in water, oblivious to our own surroundings.

That was part of the message two tourists from Europe shared recently, in an “Open letter to the people who hold power and responsibility in Canada.” In it, they found fault with pretty much the whole way people use cars in that country.

According to various media reports, English-born Holly Chabowski, 30, toured parts of Canada with a friend from Denmark, Nanna Sorensen, 23. The two spent time in Toronto, Ottawa, Montreal, Quebec City, and Halifax. They also rented a car and saw various parks, including Algonquin, as part of their 5-week visit.

Apparently, on the whole, they encountered an unhappy shock. It stands to reason they found lots of cars, highways and congestion in those major urban centers. But they were equally appalled by a sense of active bias against anything that wasn’t car-oriented:

As we explored more of the country we tried to console ourselves that at least a few cities were making an effort to make life liveable for humans – small local businesses, cycle infrastructure and pedestrianised streets. However, it felt like a token gesture rather than a genuine effort to make Canada a healthy, happy and sustainable country. Pedestrians were squeezed onto narrow pavements and forced to stop every 100m to cross the road, bike lanes were little more than paint on the ground for the cyclists to help protect the parked cars lining every street. We heard that the mayor of Toronto, Rob Ford, is actually tearing up bicycle lanes to make way for more cars!

Walking and cycling are human activities that bring great life, health and economy to communities. Streets that prioritize cars over humans are bad for business, bad for health (mental, social and physical), unsafe and break down communities.

Rebuttals flew. Hey, ladies! Get real! Canada is big, OK? “Need-a-car-just-to-get-around” big. And Canadian winters are no walk in the park either. There’s simply no comparison between here and what works in smaller, milder places like Denmark.

According to a follow-up article by Michael Woods in the Ottawa Citizen, Mayor Jim Watson distances his city from any “car culture” rap, insisting that Ottawa takes great pride in being clean and green. Watson also thinks the two tourists gave scant account to the question of scale:

“Copenhagen is about 88 square kilometres and Ottawa is about 2,800 square kilometres,” he said. “We have 32 times the land mass, so we don’t have the luxury of everything crammed together in a small European city. We have people that live a hundred kilometres from our downtown core. There is a need for streets and there’s a need for places for people to park.”

Still, it’s not too hard to find voices in support of the “car culture” complaint. The Citizen quoted urban planning expert Barry Wellar, professor emeritus of geography at the University of Ottawa:

“Ottawa has itself an immense hole. When you do things wrong year after year, decade after decade, instant solutions don’t happen.”

Wellar said he wrote a paper nearly 40 years ago, in 1975, titled Taking Steps Toward the End of the Automobile Era. He said much of the advice in that paper, such as giving buses the ability to control traffic lights, has not been followed.

“I wrote 39 years ago what these ladies are writing about now,” he said. “My guess it these ladies from Europe could come back in 40 years and it’ll be déjà vu all over again. … We have a car-centric society.”

The list of problems facing car-centric transportation models is pretty obvious: sprawl, expense, pollution, more carbon emissions, less-pleasant surroundings and a diminished sense of community, plus significant numbers killed or injured in highway accidents, and higher rates of obesity, with all the health issues that carries.

One could counter that it was highways and mobility that gave rise to our current economic development and high standard of living. But does anyone still think we can simply build our way out of the problems individual car use has also created?

I should add the travelers found a great deal they liked about Canada too. They just think the whole car thing needs work.

Chabowski furthered the pair’s initial letter with this: “Why I wrote about Canada’s car culture“. In which she responds to the responses, included an assertion that she’s not asking for cars to go away. She’s asking for more choices that doesn’t put cars first and people second.

Which does seem like a reasonable topic for conscious consideration.

38 Comments on “The long-running issue of “car culture””