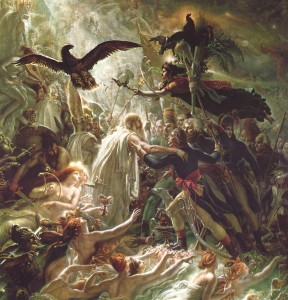 I’ve always been fascinated by con artistry, by politics, and by literature, so I love the fact that the upcoming independence vote in Scotland gives me a chance to talk about all three.

In case you’ve missed it, the voters of Scotland go to the polls this week to decide whether they should exist as an entirely autonomous nation, separate from the United Kingdom.

The outcome?  I couldn’t care less.

But it’s incredibly cool that one of the first big catalysts shaping Scottish identity was a massive fraud perpetrated by a poet in the 1700s.  James Macpherson cooked up a series of poems which he claimed were translations of an ancient cycle of myths, tapping the root of Scotland’s indigenous culture.

The narrator of the poems, a figure dubbed “Ossian,” was described as a kind of Scottish-Celtic version of Homer.

Macpherson’s goal was to convince Europe’s big thinkers – and his fellow Scottish citizens at home – that their homeland had a history and a future independent of England.  And it worked.  People bought it and the poems were a huge hit.

They were translated into French, Italian, Russian, Polish and German and became a kind of fad as far away as the Americas, where Thomas Jefferson was a fan.   Goethe wrote about Ossian and an opera based on the poems appeared in 1804.  Ingres and other great painters took up the poems.

The trouble, of course, is that Ossian never existed and the entire epic cycle of poems that supposedly provided one foundation of Scottish identity was cooked up in Macpherson’s imagination, based loosely on various poems and legends cribbed from around the British Isles and Ireland.

A debate raged through the late 1700s about their authenticity, with figures like Voltaire and Samuel Johnson expressing skepticism and scorn, while many Scots defended the work and embraced it as a cornerstone of their culture.

In his 2009 book about the ruse, Thomas Curley described the Ossian poems as “the most successful literary falsehood in modern history.” The poems still linger in the imagination because they were, by most accounts, fairly well written, if you go in for ponderous, vaguely Tolkien-esque fantasy.

“As flies the inconstant sun over Larmon’s grassy hill,” Macpherson wrote, “so pass the tales of old along my soul by night! When bards are removed to their place, when harps are hung in Selma’s hall, then comes a voice to Ossian, and awakes his soul! It is the voice of years that are gone!   They roll before me with all their deeds! I seize the tales as they pass, and pour them forth in song.”

And so on.  It turns out this kind of cultural flim-flam is nothing particularly out of the ordinary.

Many of the great works about early American culture and life are, in fact, pure put-ons.  “The Education of Little Tree,” a best-selling first-person account of Cherokee life, was written by a white guy, who also happened to be a former member of the Ku Klux Klan.  Another popular book, an “autobiography” of Davy Crocket’s life in the American West, was a fake.

Benjamin Franklin, whose writings helped craft the early American identity, worked under several fictional guises, male and female, before our War of Independence.  While writing under the pseudonym Richard Saunders, Franklin argued that “historians relate not so much what is done as what they would have believed.”

Much the same can be said for these mytho-propagandists.  They create a sense of history and identity that can be awesomely powerful, lingering long after the truth is revealed.

If the Scots do go their own way this week, claiming independence, there will be many causes, many inspirations.  But it’s delightful and weird that two of their earliest icons will have been a great poet who never existed and a literary con-man who charmed the best minds of Europe.

4 Comments on “Is fight for Scottish independence based on literary hoax?”