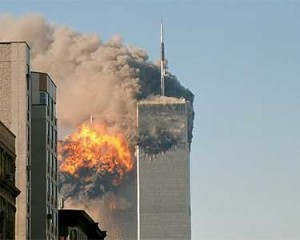 Green Party candidate Matt Funiciello has confirmed that he believes that the truth about the 9/11 terror attacks in 2001 has been concealed from the public, despite  numerous investigations and probes.

“I’m definitely as an American in no way satisfied with the official story that we’ve been told over and over again about the three towers that came down and the subsequent damage on 9/11,” Funiciello said in an interview with NCPR.

He described himself as a “questioner” of the official narrative:  “The story does not make sense and it is not just from me.”

The issue arose during a hotly contested House race in which Funiciello is polling at 10%, trailing Democrat Aaron Woolf and Republican Elise Stefanik.

In comments posted on-line, Funiciello said that he doesn’t “believe the horrific and nonsensical fairy tale our government has sold us concerning 9/11.”

As evidence that the destruction of the Twin Towers in New York City and the Pentagon in Washington DC was part of a more complex conspiracy, Funiciello asserted that one of the structures that fell, known as World Trade Center 7, collapsed under mysterious circumstances.

In fact, a report produced by the National Institute of Standards and Technology found that the WTC 7 collapsed when fires inside the building weakened its structural integrity.  “Our take-home message today is that the reason for the collapse of World Trade Center 7 is no longer a mystery,” NIST lead investigator Shyam Sunder said at the time.

Asked about that report, Funiciello replied, “I guess you have a source that you believe is correct and I have what I saw with my own eyes.”  He added that he has friends, family members and acquaintances “who don’t agree” with the official findings.

A growing issue in on-line discussions

The last couple of weeks, anonymous comments about Funiciello’s 9/11 beliefs have been popping up in various on-line discussions.  Here’s an example from this blog.  “Phil” writes, “Don’t you think it’s only right that the media reveal to voters that Matt Funiciello is an outspoken 9/11 Truther?”

Similar accusations have popped up on the blog of Watertown Mayor Jeff Graham and the comment section of the Watertown Daily Times.  In past writings, Funiciello has appeared convinced that we don’t yet know the true story about the causes of and main conspirators behind the destruction of the Twin Towers in New York City and the Pentagon in Washington DC.

In an essay posted on the Albany Times Union website in 2010, Funiciello wrote the following:

Some of the questions we should ask ourselves about 9/11 are pretty simple. Why doesn’t our so-called “free media” report on 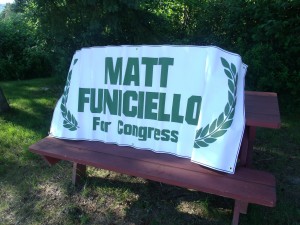 WTC 7 at all? You know, the third tower that fell for no reason and that only 5% of Americans are even aware of?

Why were no scramble orders issued to shoot down hijacked planes flying over two of our major cities? Why were the “put options” [a reference to an investment tool used by Wall Street traders] that clearly show foreknowledge not important enough for the 9/11 Commission to explore (a.k.a. the “Nouveau Warren Commission”)?

How did the cockpit of the “plane” that hit the Pentagon make a hole smaller than it actually was and then spontaneously combust without leaving any evidence of the crash? Why were there massive amounts of thermite (a highly flammable accelerant) found in independent samples of the dust taken?

It turns out the issue also surfaced on the campaign trail this year.  During a candidate panel in June in Old Forge, while talking about the NSA spying scandal, Funiciello argued that Americans “still don’t really know why a third tower came down on 9/11. Why don’t we spy about that?”

In recent days, Funiciello has defended his views in numerous posts made in the comment section of the Watertown Daily Times.

Conspiracy theories about 9/11 have been widely debunked

A large number of journalists and government agencies have probed these questions and reached a general, though not universally held, consensus that 9/11 conspiracy theories don’t hold up under scrutiny.  The magazine Popular Mechanics conducted one of the most exhaustive probes a few years ago.  Here’s what they concluded:

Sadly, the noble search for truth is now being hijacked by a growing army of conspiracy theorists. A few of these skeptics make a responsible effort to sift through the mountain of information, but most ignore all but a few stray details they think support their theories.In fact, many conspiracy advocates demonstrate a maddening double standard. They distrust every bit of the mainstream account of 9/11, yet happily embrace the flimsiest evidence to promote their wildest notions: that Osama bin Laden attacked the United States with help from the CIA; that the hijacked planes weren’t commercial jets, but military aircraft, cruise missiles or remote-control drones; that the World Trade Center buildings were professionally demolished.

This discussion about Funiciello’s views on 9/11 and the causes of the terror attacks come as the Green Party candidate is polling at 10 percent, and as he prepares to take part in three debates with Democrat Aaron Woolf and Republican Elise Stefanik this fall.  He’s argued that Woolf should drop out of the race to clear the way for his candidacy.

But that kind of clout in the race is sure to come with more scrutiny and a closer look at Funiciello’s ideas and arguments.  It’s also likely to draw attacks from his political opponents.  What do you think?  Does it matter to you that Funiciello holds views about the 9/11 attacks that are generally discounted?