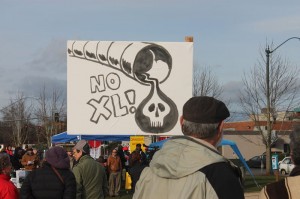 The long-stalled and controversial Keystone XL pipeline may be another “winner” in the recent mid-term election results.

But the vote counters say the electoral shift means the project has attained filibuster-proof support in the U.S. Senate. President Obama could be forced to approve the XL pipeline, should it be bundled with “must-pass” legislation. Or he could simply decide the tide has turned and that’s no longer a political battle worth winning, a possibility he is said to be considering.

Here’s a highly unscientific assessment of what’s coming. On Nov 4, the Daily Show’s Jon Stewart chatted with Reince Priebus, head of the Republican National Committee. In just a few short minutes, Priebus specifically mentioned the XL pipeline — not once but twice — as something that his party wants to get done. Soon.

Indeed, according to media reports, Priebus has stated:

With strong support in Canada’s current government and stronger legislative backing in the U.S. Congress, opponents may be left with falling oil prices or the courts as their best hope for stopping XL.