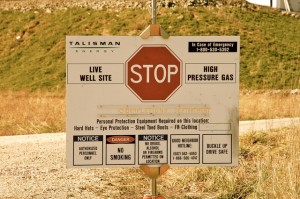 Critics of hydrolic fracturing, or “fracking,” generally have two main objections. 1) The practice puts groundwater at risk. 2) The chemicals used have adverse effects on the environment and human health.

Other concerns come to mind too, such as: could cause earthquakes, uses up too much valuable fresh water and continues reliance on carbon fuels which contribute to climate change.

But “how might that hurt me and mine?” tends to grab the most attention.

Fracking supporters assert that proper application of the latest technology is a reasonably safe trade-off for an important new source of domestic energy. With attendant jobs and economic prosperity.

As written up in Grist and the Smithsonian Magazine, a citizen scientist effort is underway that uses satellite images to locate regions that should be studied for possible health impact.

From the Grist summary:

For researchers like Brian Schwartz, an environmental epidemiologist at the Johns Hopkins Bloomberg School of Public Health, homing in on these spots is crucial to understanding whether or not fracking really makes people sick.

Schwartz and his colleagues are currently working with the Pennsylvania-based Geisinger Health System to comb through the medical records of more than 400,000 patients across the state. They’re looking for any correlation between fracking sites and increased respiratory and neonatal health problems — and they needed to know just how close their patients were living to fracking sites.

Mapping where fracking is taking place is relying on new tools offered by SkyTruth and FrackFinder.

It’s a big, unwieldy task, using a new approach. Where did SkyTruth come from anyway? As explained in Richard Schiffman’s Smithsonian article:

SkyTruth is the brainchild of John Amos, a geologist who began his career analyzing satellite images to advise oil and gas companies where to drill. He noticed that the photos revealed a lot more than just promising geological formations. Amos saw oil slicks in the Gulf of Mexico and off the coast of Australia and massive clear cuts hacked out of the vast boreal forests of Siberia—deforestation rivaling what is happening in the Amazon in scale.

“What really pushed me over the edge emotionally,” says Amos, “was looking at satellite imagery of western Wyoming, where I got my Master’s degree.” He was shocked to see that an area that had been pristine rangeland when he was going to school during the mid-1980s was, just 10 years later, “a spider’s web of drilling sites, pipelines and access roads.” Public lands had been totally converted for industrial use.

“I wondered why these pictures weren’t on the front pages of the major newspapers of the world,” says Amos. “People need to see this.”

Indeed, that became SkyTruth’s motto: If you can see it, you can change it.

The public is rightfully skeptical of scientific studies funded by an interested party. SkyTruth and FrackFinder are doing something based on civic concern, which is arguably better than doing nothing. But research carried out in association with anti-fracking groups may be dismissed as biased too. The general public is often left trying to choose between battling experts on opposite sides of a wide divide.

Where are the reliable, neutral, authoritative referees on this highly contentious issue?

What do you want done in this regard? What source(s) will you trust?