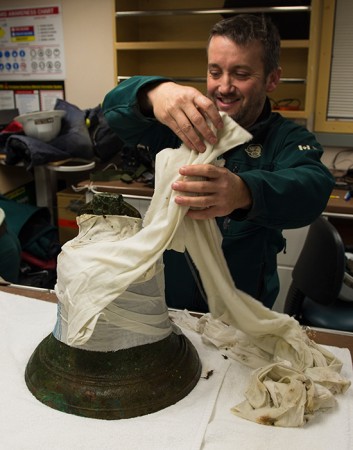 Not that many of us want to be archeologists when we grow up. Even fewer aspire to put on wet suits and attempt archeology underwater. But for those who like that stuff, and for armchair adventurers who follow their findings, Jonathan Moore must be living the dream.

Moore grew up in Kingston where he earned a classics degree at Queen’s University followed by a Master’s degree in Maritime Studies from the University of St. Andrew’s Scotland. He’s now an underwater archeologist with Parks Canada and was a key player on the team that discovered a ship from the long-sought Franklin Expedition, which made many headlines in Canada in September. The find was later confirmed to be the HMS Erebus.

Moore is giving a public lecture in North Gower, Ontario tomorrow night (Thurs 11/20) at the Alfred Taylor Recreational Centre: “A Look at Three Arctic Shipwrecks: HMS Investigator, HMS Erebus and the Breadalbane”. The talk is free and open to all, starting at 7:30 pm. North Gower is just 30 minutes from the Ogdensburg Bridge by way of the 417 (take exit 49).

(POSTSCRIPT: sorry for the bad proofreading, that should be the 416, which runs north-south from Ottawa to the border.)

Here is a Queen’s University interview with their now-famous alumnus:

I’ve had a keen interest in archaeology since I was a kid. For all of the years I’ve been doing archaeology, I suppose it’s been my curiosity about the daily lives of people in the past that captivates me most. In a way, archaeology transports one back in time and provides a tangible link with these past lives and their stories. In the case of underwater archaeology, we often explore intact shipwrecks on which people once travelled, worked, lived, and in many cases, perished. Frequently, the evidence of lives lived on what were once floating ships is very well preserved. We also explore submerged landscapes people once inhabited that, although radically transformed through inundation, can also be archaeologically vivid. All of this is extremely interesting to me and it is a privilege to be able to explore these places.

The full Q & A had much more on the many fields that contribute to conducting archeology and how work and persistence may parlay those interests into a professional career.

1 Comment on “Underwater archeologist to talk about Arctic shipwreck discoveries”