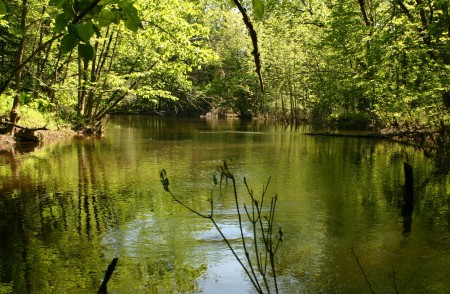 Nature Conservancy Canada (NCC) is negotiating the purchase of a 75-acre property with most of the entrances to the Gervais Caves, located near Westmeath, Ontario, about 90 miles west of Ottawa.

The Gervais Caves are said to be among the longest underwater cave systems in Canada (see more on that below).

From the NCC’s webpage on the project:

Beneath the surface of the Ottawa River lies a subterranean wonderland seldom seen by the human eye – the Ottawa River Caves. The labyrinth measures over 10 kilometres in length under several islands throughout the Ottawa River, and includes a four kilometre section on the Ontario side of the river known as the Gervais Caves. 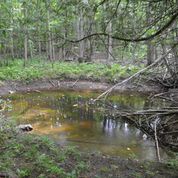 Additional funds are still being raised to complete the purchase, which is ranked as a high priority by the organization.

The most important features of the property are the karst landscape and sinkholes associated with the Gervais property. Karst landforms are an important variant of landforms created by flowing water. Water is routed underground via solutional cave systems instead of flowing at the surface in normal river channels.

At least 13 of these sinkholes are connected to the Ottawa River through this extensive network of underwater caverns. Fish such as sturgeon, walleye and smallmouth bass can be found hiding in the nooks of the caves.

Above ground, the Gervais property is just as impressive. This site is full of life – home to over 135 native vascular plant species and a number of at-risk plant species, including the endangered butternut tree, the provincially-rare Hooker’s orchid, regionally-rare moonseed and Hitchcock’s sedge. The mature forest features exceptionally large examples of Eastern white cedar, including two trees over 90 centimetres in diameter that are many centuries old. 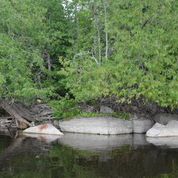 Ottawa Citizen science reporter Tom Spears had more to say about the caves and the fish population within:

Their passages range from one to 38 metres wide. There’s no vegetation in the dark caves, but clams, crayfish, eels and sturgeon move in and out from the river.

Veteran cave diver David Sawatzky told a Citizen reporter several years ago about being ambushed by a school of pike during one zero-visibility dive.

“There are some fairly aggressive fish in the Ottawa River, and they’re in the caves as well. It’s like being punched,” he said. “Some of the larger fish hit very hard, so I got punched a few times by fish. When one hit my hand, I didn’t let go (of the rope). I sort of expected it might be coming.”

The caves aren’t for amateur explorers.

“These are pretty treacherous and completely flooded. It’s not like a system that you can walk into,” said Gary Bell of the Nature Conservancy.

Pretty on the surface. Spooky down below: two layers of murky caves – with attack fish. It’s great they’ll be preserved and I’m content to learn about them from others.

Footnote: This list of underwater caves calls the Gervais caves the second longest in Canada. Yet another ranks it at number 13. Perhaps it depends on qualifying definitions?