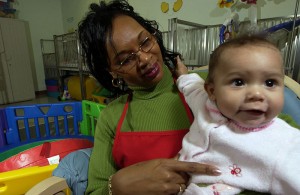 Up until recently, many may have thought Quebec’s public program of child day care sounded close to nirvana.

The current rate for provincially-run day care was $7.30 per child. Not per hour, Per day. Contrast that with average costs that range (depending on the age of the child) from $8,000 to nearly $10,000 per child per year in the North Country. That’s detailed by county in this break-down for New York State from Syracus.com.

So, back to La belle province. Faced with a worse-than-expected provincial deficit, Premier Philippe Couillard has decided higher-income families should pay more. As reported by CBC:

“This is the true definition of social justice. Actually, I’m very proud that we’ve done this, because it would have been too easy to say, ‘Let’s abolish the program or charge $25 or $30 for everyone,’” Couillard said.

Under the new formula, when families file tax returns a higher sliding scale will kick in the form of an additional assessment. Those earning less than $55K will see no hike. For those at the upper limit of income over $150K the actual cost will hit $20 per day, per child.

That’s still the best deal in Canada. And it certainly looks like a steal to U.S. parents. But for some Quebecers, it sounds like moving the goalpost, of promises betrayed. Here’s some of the negative reaction, as reported by the Montréal Gazette:

“Quebec has said daycare services are as essential as school, as health,” she said. “It’s a model based on social solidarity, and that’s what the government is in the process of destroying.”

In an interview with TV network LCN on Thursday evening, Coalition Avenir Québec Leader François Legault accused the premier of “lying to the public.”

“We could even ask if he would have been elected had he told the truth,” he said.

There’s a persistent paradox surrounding child care. It’s hard to argue that safe, nurturing care for the very young is invaluable. But when it comes to paying for day care, demand typically exceeds supply. Once slots are found, the cost feels high for the parent(s). Yet the pay usually amounts to very little for front-line day care workers, who are overwhelmingly female. (“Women’s work” typically being deemed less valuable in the free-market pecking order.)

This doesn’t even speak to long-standing debate on daycare verses home care. This 2006 study on Quebec’s public day care program, for example, presents mixed results, as discussed in this Maclean’s Magazine article.

Income stagnation has made it more and more difficult to support a family on one salary. And single parents don’t have that option at all. For all sorts of reasons, the rest of Canada and the U.S. seem highly unlikely to follow the Quebec model, which may be more than even Quebec can easily afford.

So how should this need be met? And who should foot that bill?

9 Comments on “Paying for day care”