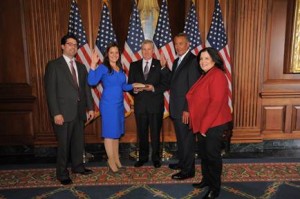 It’s official.  The North Country has a new member of Congress.  Tomorrow morning during the 8 O’clock Hour, Sarah Harris will have a full report on Rep. Elise Stefanik’s swearing in.  Five years ago, Rep. Bill Owens from Plattsburgh was part of a huge Democratic wave in the nation’s capital.

Now Stefanik is part of a historic moment for the GOP and as the youngest woman ever elected to the House she’s expected to take on a prominent role within her party.

Sarah reports that Stefanik has already been named to the Armed Services committee, providing her with a prominent seat to represent Fort Drum near Watertown.

“I am thrilled and humbled by this opportunity to serve the wonderful people of New York’s 21st district,” said Congresswoman Stefanik, in a statement.  “I pledge to be a strong voice for our community in Congress and to work my hardest to advance bipartisan solutions. Washington is broken and now is the time for leaders to work together on behalf of the American people. I am grateful for this incredible opportunity.”
Tune in for Sarah’s report tomorrow.