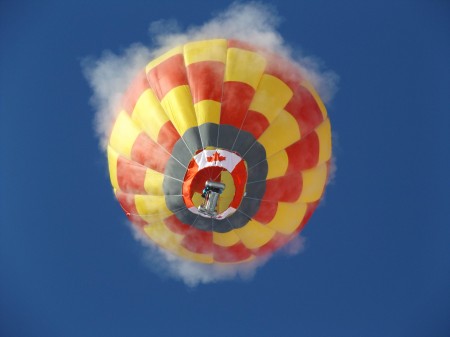 While on the topic of stunts that raise eyebrows, here’s something you may have missed last week. From the Ottawa Citizen (with video and Q&A):

“Extreme balloonist” Sandra Rolfe landed in a field just south of Montreal’s Mirabel Airport on Tuesday after a record-breaking run of about seven hours and 25 minutes aloft in her AX-04 hot air balloon.

Rolfe landed at 3:28 p.m. following a flight that began just after sunrise near Plantagenet, Ont. The flight, if recognized by the Fédérational Aéronautique Internationale, would be the third world ballooning record for Rolfe, 50, of Ottawa.

It’s important to note the accomplishments under discussion here are for specific types of balloons and some records are set by gender. Attempts to set new records must pass a strict validation review to be official. It’s a rigorous process that can take several months before claims are accepted or rejected. Having said that, participants with this this flight consider it a valid attempt that should pass muster. (Rolfe already holds two world records and many Canadian records, including some in the “general” category which is gender-neutral.)

There’s more on all that at the National Capital Ballon Club website.

Here’s a recent “what was it like”? article from the Ottawa Citizen. (Hint: it was c-c-c-COLD.) That article includes a  video and a good graphic mapping out flight details.

Dr. Sandra Rolfe is a grandmother who holds a PhD, works as an HR compensation specialist at the CBC and is the current president of the Canadian Ballooning Association.

Rolfe and Bill Whelan (the balloon builder and ground crew cheif) talked about the whole adventure in this audio interview with Alan Neal of CBC’s All in a Day.

In email communication with me, Rolfe was especially keen to share credit with the National Capital Balloon Club and many specific individuals who made the attempt possible. She wrote:

The official Observer for the flight was Mary Lalonde. The project manager and chief of everything on the ground, and the manufacturer of the balloon was Bill Whelan (he has a shop in Sandown, Ontario and is a local Ottawa boy, and totally interesting guy). Crew was Gerard Piette, Robert Chisholm, Lisa and Tommy Quevillon, Liz Lalonde, Dominic Larosa, Bri Johnstone, Jean Drouin, Eric Jaring, and many others who were on the “home team”

No one got hurt. No Lincoln Continentals ripped apart and plummeted into any river, as in a recent discussion of airborne audacity. All in all, a smart, successful effort. 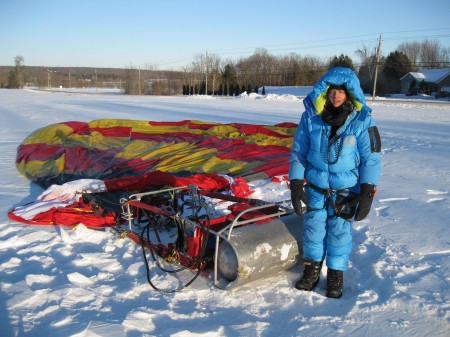 As little balloon weight as possible – with as much down-insulated clothing as possible. Dr. Sandra Rolfe pictured with the balloon built by Bill Whelan. Photo: Gerard Piette, used by permission