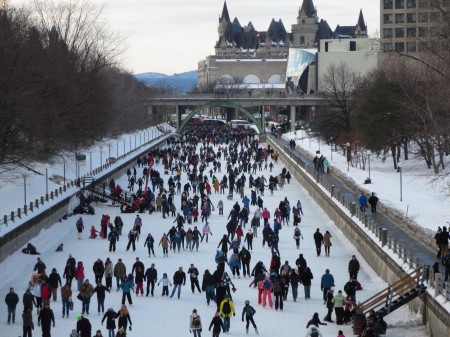 Ottawa’s main winter event officially kicks off today, with a long list of activities and displays. Winterlude runs for the next three weekends, including Feb 16, to take in a holiday Monday in Ontario.

The weekends are thick with all manner of supplemental events. But the Rideau Canal Skateway and displays like ice sculptures, Snowflake Kingdom slides, etc. are available each and every day, weather permitting. Most events are free, and that includes shuttle busses between venues.

Speaking of weather for Winterlude, no mushy melt this time around. Not for opening weekend anyway, when “bundle up” will the word to the wise.

NCPR makes a point of carefully vetting these activities over the years, individually or on bus tours. Here’s David Sommerstein interviewing young experts about the slides at the Snowflake Kingdom in 2011.  Sarah Harris took her Mom to skate the canal last year. 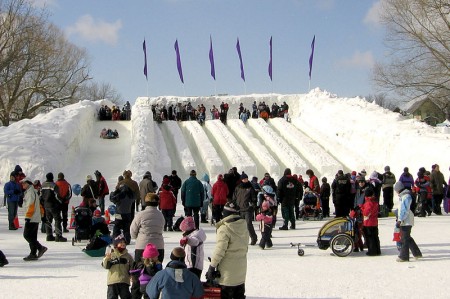 Yours truly did a sunset skate this past Tuesday. (The ice was rated as “good” and it was just that. Hard, clean, safe.) It was nippy enough to need a face scarf. But it was also peaceful, uncrowded and wonderfully uplifting. 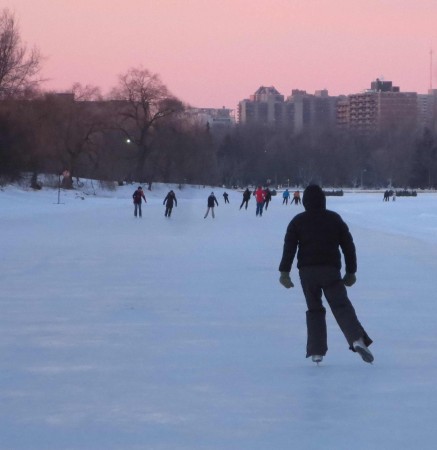 “Off peak” skaters practically have the canal almost to themselves. Photo: Lucy Martin

Most of the time I am happy to live out in the sticks, in rural Ottawa. But there are times (and that skate was one of them) when I deeply regret not living where it would be easy to enjoy the canal every day.

Partially due to the slump in oil prices, the Canadian dollar continues to slide, down to rounded-number of 78 cents against the U.S. Dollar by week’s end. Or, for the U.S. visitor, your dollar is now worth roughly $1.27! (Less conversion fees, if any.) A good reason to come, if the skating and extra events aren’t tempting enough on their own.

OK, it’s not all about stimulating the Canadian economy. It’s about embracing the season with your own community. If travel is not on your agenda, check out your own local winter festivals. Because February is short. This too shall pass.

I know! The winter weary say “thank goodness for that!” Meanwhile, count me in the group that finds this time of year something to savor. 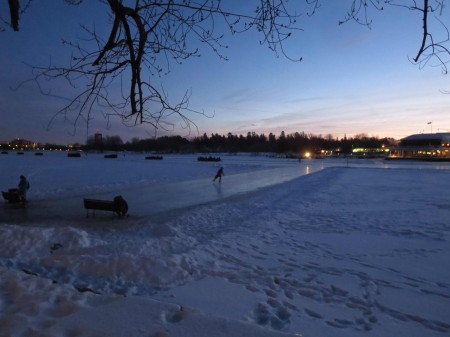 Heading out for an evening skate at Dow’s Lake (January 2015). Photo: Lucy Martin

1 Comment on “Welcoming Winterlude – now “on sale” for Americans!”