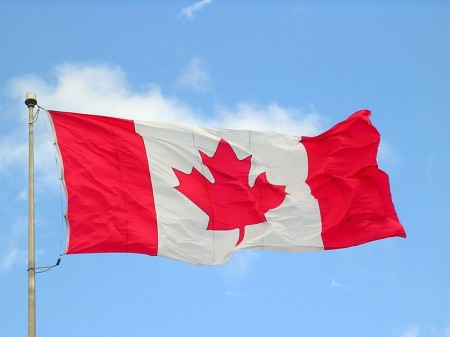 February 15 marks the 50th anniversary of one of the most recognizable flags in the world, the red Canadian Maple Leaf.

The event comes with a curious lack of funding and pomp in Canada, when compared to the hoopla directed toward the 200th anniversary of a generally-forgettable war. (Yes, yes. The War of 1812 was a very big deal in our listening area. But Canada wasn’t even an actual country then. Just saying.)

This CBC article includes a clutch of flag and patriotic-themed videos from the past several decades, including the famous beer ad. Who can forget your-average-Joe getting a little excited talking about “I am Canadian.”

I remember some discussion of the flag change, which I read about thanks to the Scholastic Company’s “Weekly Reader“. (Expo 67 shows off Canada’s new flag, or something like that.) With absolutely no idea I would ever visit Canada – let alone move there – even little Lucy thought the new national banner had a pleasing simplicity.

Fifty years is recent enough for there to be plenty of personal anecdotes about how that flag came to be. Here’s a  post from 2014 about Joan O’Malley, a young Ottawa woman who sewed the flag’s prototype as a favor to her civil servant Dad.

For background’s sake, here is a timeline of flags used to represent Canada across the centuries. (Just because I think it’s fun to look at, here’s a timeline of various U.S. flags too.)

This sea-to-sea finalist that included the historically-important colors of red and blue was not chosen.

As could be expected, the idea of creating a new flag as an exercise in improving national unity was hugely controversial. Complains were raised (then and since) that what emerged was too red (suggesting Britain or the Liberal Party), or that a different nominee was a better pick.

But 50 years on, the Maple Leaf has definitely taken root. It’s instantly-recognizable and celebrated as a icon of national identity. A fine example of good, clean design.

Many individuals had a part in creating the Maple Leaf. Writing for Maclean’s, John Geddes argues the man who should get more credit for the final flag was Jacques St-Cyr, part of a top-notch design team for Montréal’s up-coming Expo-67:

The designer had grown up in Trois-Rivières, Que., served in Europe during the Second World War, then studied in New York before coming to work for the government. [Patrick] Reid says St-Cyr was a somewhat introverted man, but a strong Quebec nationalist who seemed “ a bit stunned” to be asked to work on Canada’s flag. “Anyway, he gulped a bit and grinned and said, ‘Okay, sure, let’s go.’ ”

Could anyone do as well with a similar task today? Geddes suspects not. 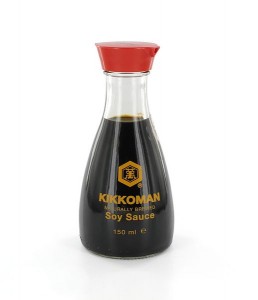 Speaking of good design that proves its worth over and over, I must add that the world lost a great creative force earlier this month. Kenji Ekuan wasn’t exactly a household name in North America. But the chances are you’ve used his most popular design: the classic soy sauce bottle. His range was amazing, from the little drip-free dispenser to the bullet train.

Ekuan was remembered in this NPR obituary:

A native of Hiroshima, Ekuan was 17 when the city was hit by an atomic bomb toward the end of World War II. In the blast, he lost his sister and father, who was a Buddhist priest. He later said the devastation motivated him to start building things.

“Faced with brutal nothingness, I felt a great nostalgia for something to touch, something to look at,” he told Japanese broadcaster NHK. “The existence of tangible things is important. It’s evidence that we’re here as human beings.”

Is there any connection between a shoyu bottle and a flag? Well, I think it’s suggested in Ekuan’s comment. The  best designs are practical, beautiful and evocative. This flag suggests the heart-felt connection of people to their land, as symbolized by the humble leaf of an iconic tree.

If you’d like to actually do something connected with the Maple Leaf’s 50th anniversary, you need go no farther than Brockville, which is holding a (first- annual) flag festival on the 15th.

And? So? Did Canada pick the right flag?

Older readers, what do you remember about that change?