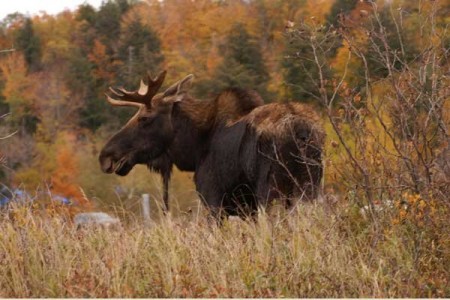 Moose in the marsh on Raquette Pond in Tupper Lake. Archive NCPR Photo of the Day: Ted Merrihew

As discussed in earlier posts, moose are having a tougher-than-usual time of late. One of their pressing problems is increased infestations of winter ticks, which may be related to climate change.

Here’s how that goes for the poor moose, according to this fact sheet from Quebec’s Ministère des Forêts, de la Faune et des Parcs:

In years when infestations are significant, thousands of ticks may attack a single moose, causing problems for severely affected animals. Clinical signs generally become visible towards the end of winter (February and March), and may take different forms:

The cumulative effects of all these factors, combined with harsh weather conditions, can affect the health of the moose, making them more vulnerable to predators, poaching and road accidents. In some cases, severely affected animals may die. Young moose are particularly vulnerable.

This CBC article from last October discusses concerns over winter-tick stress on the moose population in Quebec:

According to some of the first data collected, three-quarters of the moose surveyed south of the 50th parallel were carrying winter ticks. Below the St. Lawrence River, that percentage climbs to 93 per cent.

The numbers are high, but it is not yet known at what point the parasites begin seriously affecting the health of the moose.

However, looking at the state of New Hampshire — where the moose population has diminished by half over the past 15 years — is a cause for concern.

A novel new idea for fighting ticks involves using paintballs filled with insecticide. Over in British Columbia the owner of a wildlife shelter thinks this technique (inspired by her son’s fondness for paintball shooting) could have some practical application. As reported by CBC:

Angelika Langen has been experimenting with ways to de-tick moose at her wildlife shelter in Smithers.

She found some powders designed for farm animals work, but applying them to wild animals wouldn’t be easy.

“We found that the powders work quite well. So if can get the powder to the affected area and you powder them up, then within 24 hours — latest 48 hours — the ticks are all dead and they fall off,” said Langen.

Obviously, this wouldn’t be very practical out in the wild, where moose make a point of not being seen. Assuming it could be applied, there would be risk. Getting shot, even with tick dust pellets, is provocative. Moose are easily capable of defending themselves with vigor and success. As discussed and shown in this Spokesman-Review item by Outdoors blogger Rich Landers, it is very ill-advised to crowd them in any way. 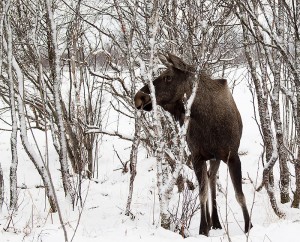 Meanwhile, in Ontario the Ministry of Natural Resources and Forestry has proposed a reduction in the annual calf-hunting season and changes to the adult hunting season, proposals the Ontario Federation of Anglers and Hunters (OFAH) calls “overly restrictive and unnecessary”. (Here’s a link to the proposed moose season and surrounding rules in Ontario.)

Moose researcher and biologist Vince Crichton says the proposals fall short and a “more significant intervention” is needed. As reported by CBC:

“You’ve got to get rid of that calf season totally, only for a period of time, until you get that population up,” he said.

Readers, whether you hunt or not, are you seeing moose this winter? How have they looked? 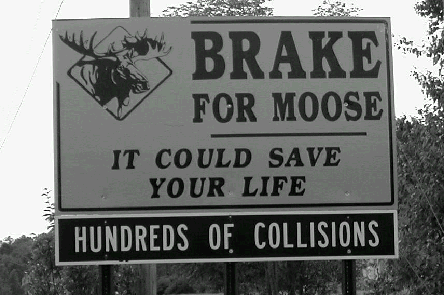 How many of us interact with moose: as road hazards to avoid! Image: Creative Commons

6 Comments on “Can you de-tick a moose without ticking it off?”