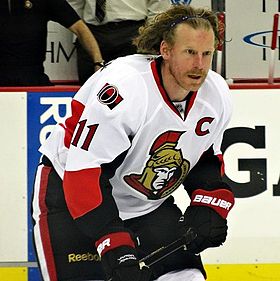 Alfredsson in action, May 2013.
Image: Wikipedia

Remember when everyone walked miles to school, through deep snow drifts, and it was uphill in both directions?

But once upon a time, in the world of pro sports, it wasn’t all that uncommon for teams and fans to have a real relationship. Loyalty – a sincere connection to people and place – that is harder to find today.

It’s that old school stuff which had Ottawa hockey fans getting a bit misty-eyed this past Thursday, when the City of Ottawa presented the key to the city (so to speak) to someone who only needs one name in these parts: Alfie.

No, in his 18-years with the NHL Daniel Alfredsson did not lead the Ottawa Senators to any Stanley Cups. But when the young Swedish player arrived in 1994 he bonded with this city to an unusual degree. True, as his career wound down, he did make a move to the Detroit Red Wings – a team that had a better chance at going all the way.

So it was quite touching, when it came time to really hang up the skates, that arrangements were made for a one-day contract permitting Alfredsson to return and retire as an Ottawa Senator on Dec 4, 2014.

Here’s coverage of this week’s “key to the city” event from the Ottawa Citizen and CBC sports.

The ceremony even generated this editorial from the Citizen saying Alfredsson’s humble work-ethic, his contributions to sport and to civic engagement made the honor much-deserved:

With all due respect to the mayors and prime ministers who’ve called Ottawa home over the years, for many, Alfredsson was, and remains, the face of the capital. He led the transformation of a moribund National Hockey League franchise mired the depths of its embarrassing expansion years — a hockey punchline, really — into a President’s Trophy winner. Alfredsson also established, with a mix of hard work and irreverence (remember the Mats Sundin stick toss?), a unique identity for a team…

Alfredsson talks about enjoying retirement so far – and what may come next – in this Ottawa Citizen interview (with video).

Warm and fuzzies all around. Thank you, Alfie!

2 Comments on “It was a lovefest: Ottawa honors Daniel Alfredsson”