There’s little consensus on how to balance the current conflict between privacy and security. 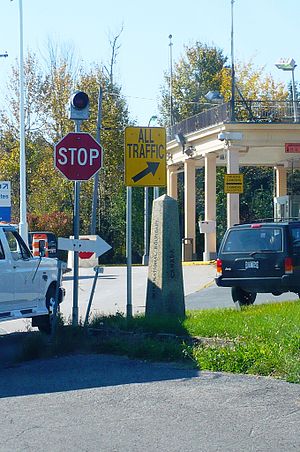 A sizable faction says something along the lines of “Hey, if you have nothing to hide, then there’s no problem” and accepts “whatever it takes” to protect public safety.

Benjamin Franklin’s pithy quip is often invoked too: “Those who would give up essential Liberty, to purchase a little temporary Safety, deserve neither Liberty nor Safety.” (Sidenote: this NPR piece asserts this current use mis-appropriates how Franklin first meant that comment.)

To all that add the “anything goes” nature of border crossings.

Many do not know how few rights exist in that area. Others wish the courts would clarify that picture.

As reported in Canadian news sources, Quebec resident Alain Philippon found all this out first hand when he recently refuse to provide the password for his cell phone to airport border agents inspection in Halifax last Monday. He was returning from time spent in the Dominican Republic.

Philippon was charged with “hindering” under section 153.1 of the Customs Act, according to Canadian Border Services Agency representative, If found guilty, he could be facing a fine between $1,000 – $25,000 and up to a year in jail.

According to CBC coverage:

Philippon did not want to be interviewed but said he intends to fight the charge since he considers the information on his phone to be “personal.”

Supreme Court rulings in Canada on cellphone privacy have been mixed. But those decisions were for internal/domestic cases.

Travelers crossing Canadian borders have a “reduced expectation of privacy”, according to Rob Currie, director of the Law and Technology Institute at Dalhousie University. Again, from CBC:

Currie said the issue of whether a traveller must reveal a password to an electronic device at the border hasn’t been tested by a court.

“This is a question that has not been litigated in Canada, whether they can actually demand you to hand over your password to allow them to unlock the device,” he said. “[It’s] one thing for them to inspect it, another thing for them to compel you to help them.”

Currie said the obstruction case hinges on that distinction.

When it comes to borders, you may be surprised at what’s allowed. Or you may be pleased, depending on your security priorities.

Here’s how one informational website (exbordercrossing) spells it out:

Border Searches
Courts have granted customs agents extensive rights to search, without probable cause, literally anything you have with you when you cross the U.S. / Canadian border.   U.S. courts have upheld the U.S. CBP’s right to perform searches that might otherwise violate a U.S. citizen’s Fourth Amendment rights.  Both the U.S. and Canadian border services assert the right to search –  and seize –  any electronic or digital storage devices such as laptops, tablets, discs, digital cameras, cell phones, and hard drives.

What can they search on your electronic devices?

Border agents have successfully asserted the right to examine all files on all electrical devices including personal or business financial information, music files, and lists of Web sites you have visited.   You can be forced to open encrypted files or the government can take the time to do it themselves.  Random searches are allowed.   They may also  also freely share the data from those computers — personal and business records, web-site visits, email – with other governmental entities.

No compensation is provided for any losses suffered by the owners of laptops or other media as a result of the seizure even if the contents are destroyed by government.  A laptop can be held for over a year and the owner may not be allowed to get a copy of the contents of their hard drive.

This policy covers all individuals without exception. It has been reported that 6,671 travellers had laptops, cameras and cellphones searched between Oct. 1, 2008 and June 2, 2010 and that around 3,000 were seized.  This right also extends to searches of documents, books, pamphlets and other printed material.

That same site goes on to answer the “what should you do?” question.

* If there is something you don’t want seen – don’t have it with you.  You can always use cloud services such as Dropbox, Google drive, or Microsoft Skydrive to store important information and access it later. This is your most effective way to protect sensitive information.

* Try to minimize the appearance that you are trying to conceal something.  Pack your bags as neatly as possible. Wrap computer cables neatly so everything  can easily be viewed at a glance and does not look like something may be hidden.

* Always make sure you have a backup of your digital media before you cross the border.

I’ve included the “what should you do” advice not to help criminals or terrorists. Presumably they understand their own need for concealment. But plenty of “just folks” with nothing criminal to hide remain at risk of the frustration (embarrassment?) of having their private lives examined. Having a back up – in case a laptop is seized and not returned for a year or so – would be quite wise.

This stress between protection and privacy is far from settled. It also seems unlikely there is any way to satisfy both sides of that spectrum.

12 Comments on “Borders as a “no-privacy” zones”