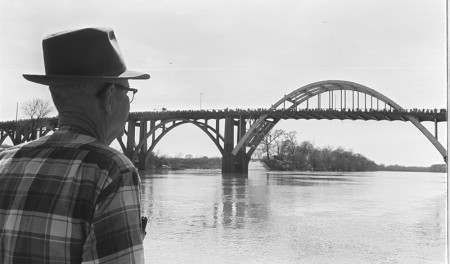 It happens over and over again. There’s a whole world of events – terrible and wonderful – that don’t seem to matter as much unless the brutality, or beauty, is preserved as images. Quite often, seeing is believing.

Remembering landmarks like 1965’s protest marches from Selma to Montgomery, Alabama might seen over-played of late, between a major motion picture release and all sorts of anniversary events.

But it’s not ancient history, all settled and happy. The U.S. – then and now – is far from where it needs to be when it comes to justice, use of force and racial harmony.

Canadians may watch these American dramas play out with some degree of smug superiority, until confronted with their own Achilles’ heel: a host of issues faced by indigenous citizens in “the true north, strong and free”. 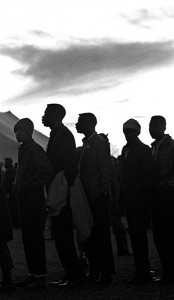 Supper line up after the 1st day of the march to Montgomery. Photo: Lynn Ball, used by permission

So, with that as the backdrop, why not keep learning?

A photo exhibition, “Selma at 50” opens Saturday, March 21 at the Canal Gallery and Frame Shop in Merrickville, Ontario.

Lynn Ball is a news photographer (and author) who retired after a long career with the Ottawa Citizen. But when Ball was 22 years old and just getting started he heard about the protests in Selma, including two previous marches that were suppressed by violence. He decided to drive there to see events unfold for himself.

Coming from Canada, the south of that era was like nothing he knew.

There were multiple attempts to stage the protest on March 7, 9 and 25. The first became infamous after peaceful protestors were attacked and beaten by Alabama state troopers on the Edmund Pettus Bridge. The second march was blocked by state officials. Ball chronicled the third march, the one that made it all the way after President Lyndon Johnson ordered soldiers and federalized Alabama National Guardsmen to protect the marchers.

Peter Simpson of The Big Beat (arts coverage) from the Ottawa Citizen has this Q & A with Ball about what he saw and tried to capture on film: 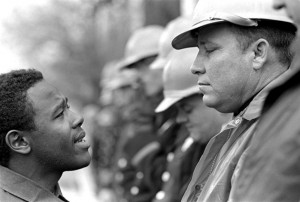 Willie Ricks confronts Sate Police in Montgomery asking to be able to walk on the sidewalk. Photo: Lynn Ball, used by permission

Q: Is there a memory of the experience that particularly stands out for you today?

A: There is a shot . . . taken in Montgomery a day or two before the start of the Selma march. The demonstrator is Willie Ricks before he became famous. He and a white fellow led their demo to the state capital building. They attempted to get on the sidewalk but were blocked by state troopers. They legally could demonstrate on the sidewalk but. . . they were arrested. Ricks would approach the troopers and say to them, ‘I am Willie Ricks, I’m from Tennessee, please let me on the sidewalk. Governor Wallace says I can walk on the sidewalk.’ He was arrested. Ricks later changed from a pacifist to a Black Panther and is the person responsible for the fist salute and the phrase, ‘Black power!’ as seen at the Olympics in Mexico 1968.

Those experiences and how Ball’s historic photos will be presented at this month’s show, was described by Jennifer Westendorp, for the Kemptville Advance. Ball mentioned that some of the more inflammatory images were subject to internal censorship.

“AP (Associated Press) sent out the pictures and then immediately sent out a kill order on them,” said Ball.

A “kill order” means they can’t be published.

Some of Ball’s film from the successful march was actually just sitting around, undeveloped, until earlier this year. It’s the anniversary hoopla that drew out these hidden treasures, a plus for us now. 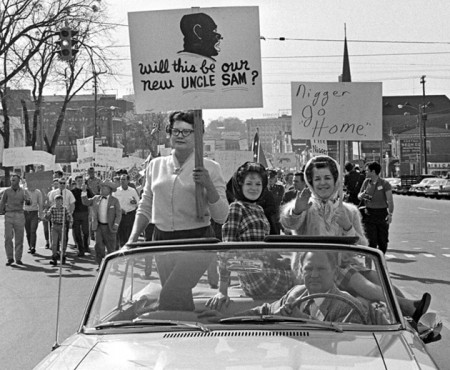 The CBC’s Stu Mills prepared this video on Ball’s photos and the events he witnessed.

Ball talks about his Selma experience and other aspects of being a news photographer in this “In Focus” interview on Lake 88.1 with Lynda D’Aoust.

Saturday’s opening day runs from 10 am to 5 pm. Canal Gallery owner Ted Hitsman told me via email that he hopes to host Lynn Ball’s “Selma at 50” for the next two months. 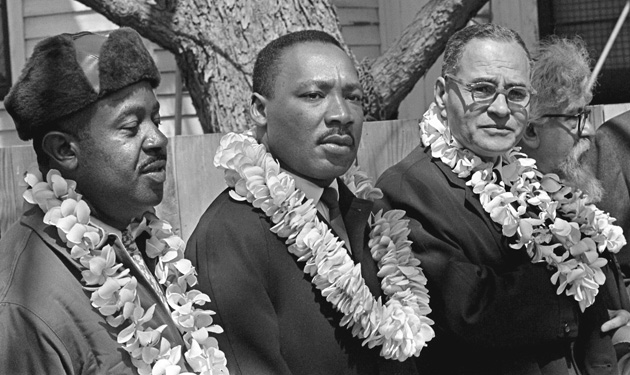