Subscribe
iTunesSpotifyGoogle PlayRSS
by Brian Mann on May 2nd, 2015 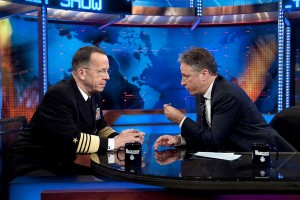 Okay, let’s get one thing out of the way.  Pound for pound, public radio is maybe the least funny media outlet in America.  Public radio mostly sucks at humor when we’re trying to be funny.

But…but…and stay with me here…the one time that we’re sometimes really, really humorous and engaged and laugh-out-loud hilarious is when we’re trying to be deadly serious.

Listen to an episode of Radiolab or This American Life or the Moth or Scott Simon on a good weekend morning and you’ll find storytelling that captures that most American of art forms, mingling hard truth and satire with a morally grounded sense of humor.

Which brings me to Jon Stewart.  Stewart winds up his culture-changing run as host of the Daily Show this August.

The truth is, the show has morphed dramatically over the years.  The show that’s ending this summer isn’t the show he took over in 1999.  It started out with a whole lot of schtick, with Stewart happily playing the jester in the halls of American power.  He seemed gleeful.  He seemed truly amused by the antics that surrounded him.

But the last half-decade or so, not so much.  The last half-decade, Stewart has oftened seemed angry, disgusted.  He wanted laughs, sure, but he wanted answers more.  And really, Stewart has been the most engaging and the most hilarious as he’s dug deeper and deeper into the role of actual journalist, interviewing guests with the kind of probative, deeply researched questions that few American reporters can match.

Watching recently as Stewart dismantled former New York Times reporter Judith Miler — who helped build the case for the Iraq War — I found myself thinking over and over, “Why the hell is this interview happening on late-nite TV?”

The truth is that Stewart’s focus and his interests have moved him further and further along a path away from Johnny Carson and David Letterman (and even George Carlin) and closer and closer to Terry Gross and Ira Glass. In fact, there are times when Stewart’s imperative to act funny, to strive for yucks, seems more and more strained and awkward.

So here’s my humble invitation.

Why not come home to the place where grown-up, hard, civil conversations are happening every day about exactly the things that Jon Stewart thinks we need to be talking about? Here’s a reality. A lot of the audience that Stewart started out with in 1999 has already graduated to public radio.

The college kid who tuned in the Daily Show in 1999? She’s in her late thirties now. She has a mortgage and two kids and a divorce.  And she’s listening to NPR on the drive to work every day. She’s here waiting for you, Jon, right here on the FM dial or on her smart phone podscast.  And she’s willing to follow you and your line of curiosity, even when you’re doing a show where there doesn’t need to be a punch-line or a clown-gag.

In pragmatic terms, it’s also worth pointing out that hosting a daily interview show on public radio is a lot easier than hosting a nightly television show. You can come to work in your blue jeans.  You can work from studios anywhere in the world. Hell, you can work from home a lot of days. Which means that doing a stint in our world would still allow Stewart tons of time to pursue the side projects –movies, stand-up, whatever — that seem certain to be a part of his creative future.

A regular public radio talk show would also maintain Stewart’s essential role in the national dialogue. It would allow him to shed some of the “I’m not a real journalist” song-and-dance and instead begin to explore, publicly in his inimitably self-revealing way, what it means to be the kind of journalist America needs.

The truth is that public radio is a much, much better fit for Jon Stewart than the Late Show will ever be for Stephen Colbert. Colbert’s decision to go the route of Jimmy Kimmel and Jimmy Fallon still leaves me sort of breathless.   How he packs all the rage and razor-blade humor into the avuncular, goof-ball move-down-the-couch realm that late-nite has always been — and why the hell Colbert would want to try — is a mystery.

By contrast, the idea of Stewart turning in a few years in public radio makes a lot more sense. Of course, our world pays a lot less than Comedy Central (or the Late Show) but I’m guessing Stewart didn’t leave the Daily Show in search of a bigger paycheck. He left because he was a little bored and a little restless and wanted to try something really, really different.

So, I say the right place for this great humorist and observer of the American story is right here.  Hell, why not take a trial run at it, piloting a radio show that launches next January and runs through the November elections? That would be an hour of daily NPR that a huge swath of America would tune in to hear.

11 Comments on “Memo to Jon Stewart: Join us. Public radio is your natural home.”